Great Coffee for the Greater Good 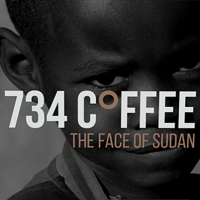 New York, NY -- (ReleaseWire) -- 03/20/2019 --Founder, Manyang Kher (pronounced mun-yung) touts 734 Coffee as, "organic and the best coffee there is known to mankind." The company will use profits to provide college scholarships and educational programs in Gambela, geographically located 7 degrees North 34 degrees East in the Ethiopian region. Hence, the name 734 Coffee.

Manyang Kher is one of the "Lost Boys". He is a part of the group of nearly 20,000 children displaced by the civil war in Sudan in the 1990s. America welcomed him and he was able to begin a new chapter by completing his collegiate studies at University of Richmond. Today, Manyang is an Adjunct Professor of Human Rights and Social Justice at George Mason University. To date, 734 Coffee has provided full scholarships for ten students. Manyang says, "It is important that the refugees see success through education. My life was never promised, but through education it got better, thanks to people who helped me along with the educational system."

ETHICALLY SOURCED The coffee beans are grown and harvested in Gambela from a co-op of African-owned and operated farms.

SPECIALTY GRADE The coffee has been graded Specialty, or "Grade A", by the Specialty Coffee Association of America for its ideal growing climate and for its full-cup taste and quality.

NATURALLY FARMED The plants are raised and harvested without chemicals in the ideal natural soil composition. After picking, the beans are sun-dried to maintain their natural aromas and fruity flavors.

FAIR-TRADE The coffee is imported as fair-trade to support good, sustainable work for African farmers and harvesters.

LOCALLY ROASTED Once the beans are imported, they are roasted by local, independent coffee roasters in the United States.

Unlike the competition, 734 Coffee tackles the UN sustainable development goals of quality education, gender equality, and reduced inequality while allowing the consumer to maintain their daily coffee enjoyment.

Every bag of coffee purchased, provides four refugees with one more day of school. Every cup brewed equal one more hour of learning. As the program grows, 734 Coffee wants to provide full college tuition for 50-100 students annually. Their program empowers the future leaders in these communities and enables them to build better lives.

The scholars have seen their families, villages, and their nation torn apart by civil war. They have had up-close-and-personal encounters with prejudice and corruption. Their voices, their stories, and their wisdom are essential in the continued struggle for peace. In them is the hope to repair their own communities and rebuild the nation they called home by building a bridge and providing opportunities in America warehousing and roasting coffee beans.

734 Coffee is for the conscious consumer who wants to take a stand for the millions of lives affected by the refugee crisis—by empowering those who can change it.