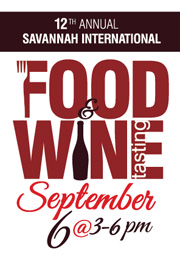 Savannah, GA -- (ReleaseWire) -- 08/12/2014 --The St. Barbara’s Philoptochos Society hosts the 12th Annual Savannah International Food & Wine Tasting on September 6 from 3 to 6 pm at the Hellenic Center located at 14 West Anderson Street, Savannah, Georgia, 31401. This year’s event features more than 50 wines and signature dishes from nearly 20 of Savannah’s best restaurants. Participants sample food and wines from around the world and then shop at the charity silent auction from 3-5 pm. The silent auction features unique merchandise donated by local businesses, artists, and individuals. This year, a portion of the proceeds from the auction will go to support C.O.P.E., a program that combats childhood obesity, and Camp CoDiaK, a camp for kids with diabetes, a program of St. Joseph’s/Candler Hospital. The Cost is $30 per person; ages 21 and older only. Tickets are available from any Philoptochos member for $30.00 per person, at E-tix, or at the door for $35.00 per person. For more information, go to http://www.stpaulsgreekorthodox.org or call 912-236-8256.

About Philoptochos
Philoptochos is the largest organization of Greek Orthodox women supporting many charities while spiritually enriching its members through their participation in its philanthropic work. Established in 1931, Philoptochos is the second largest women’s philanthropic organization in the United States in terms of money donated to charitable causes. It is second only to the Sisterhood of Hadassah, the Jewish women’s charitable group. Philoptochos functions at the local, diocesan, national, and international levels and is open to all women over 18 years old who are of the Greek (Eastern) Orthodox faith.