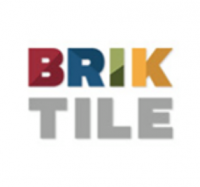 The Brik Tile is the perfect solution for those looking to instantly LEGO™-fy the world around them. After having already successfully raised money on Kickstarter to create the award -winning Brik Book, the customizable LEGO™ MacBook case, the Jolt Team is back with an ambitious project that aims to turn the world into a brick lovers paradise.

"As a child I was always building and coloring on the walls. My parents encouraged creativity, but they weren't always thrilled with the walls being destroyed," says founder and CEO Brett Miller on the inspiration behind the project, "As an adult I wanted to create a wall surface that was adaptable, without destroying the walls. We decided to design a removable, studded surface that's compatible with most toy building bricks. Brik Tile can be used to build small shelves, pixel art, organizers and more."

The past year spent designing and prototyping has resulted in the 10"x10" Brik Tiles (patent pending). Each Brik Tile is backed with a temporary adhesive and can be applied multiple times to almost any smooth surface including walls, doors, dressers, refrigerators, and more. Unlike traditional baseplates, Brik Tiles can be attached next to each other directly (without the need for gaps or spacers).

In addition to creating beautiful pixel art, the Brik Tile can be used to organize cables, hang photos, display cards or virtually any type of small shelf. Simply apply at home or at the office for a fun twist to traditional organization and office supplies.

"Kids are always destroying bedroom walls with tape, glue, markers and pins. Instead of discouraging that creativity, we wanted to create a product that encourages building (without destroying the walls). Kids (or adults) can install Brik Tile in seconds and make their walls completely interactive," adds Miller, "Need a pen holder? Build it. Need a shelf for your Pez collection? Build it. Want to create amazing pixel art that you can change anytime? The sky is the limit!"

Brik Tile is currently live and available to support on Kickstarter: http://kck.st/28P8hj5

About Jolt Team
Jolt Team builds products that help the young (and young at heart) express their inner child. The company launched Brik Book (LEGO compatible MacBook case) on Kickstarter in 2015. Brik Book tripled its funding goal by pre-selling over $90,000 in Brik Books in 30 days. Brik Book was featured in Vanity Fair as an ultimate gift of 2015 and was listed on Oprah's O-List in May, 2016. Jolt Team launched Brik Tile (make your walls LEGO compatible in seconds) on June 22, 2016. Brik Tile hit its $30,000 funding goal in 5 days and has almost tripled it 2 weeks later.