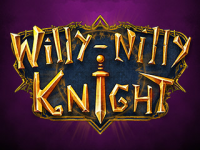 Willy-Nilly Knight tells the incredible story about the confrontation of gods and who unknown knight seeking to find his purpose in the world. As the brave adventurer fights farther into this dark world, he discovers an ancient evil that threatens the destiny of mankind.

The RPG adventure takes place in a third person isometric view while combat occurs in a tactical turn based mode. All characters are set with various skills and inventory items, all of which can be built up throughout the game to earn action points to build the stats of their character, making them stronger and more skilled as the game progresses.

The game is led by an incredible team of experienced developers who have worked in world famous companies like Social Quantum, Game Insight, 1C-Battlefront and on blockbuster titles including Dragon Lands, Age of Fury, Megapolis, Starborn Wanderers and more. As larger companies have shifted their efforts to mobile games which can be made on the cheap and exploited endless for additional income, Double Dice Games has take an approach to create a game with old school RPG flavor that favor tactical skills and increased strategic thinking. Willy-Nilly Knight is throwback to the games of yore where gamers are forced to think twice before acting, and become active players, rather than mere observers on a pre-destined path.

"We live in time of incredible technological advancements! Self-driving cars, nanotechnologies, a PC in our phones…," says CEO of Double Dice Games Kozanov Timur, "We've dreamed of creating games since our childhood. And now we can bring this dream to real life in Willy Nilly Knight. Take the beauty of an interesting story, wrap it into great gameplay and open up a whole new world of possibility that never before existed."

The game is currently deep in development and hopes to raise funds on Indiegogo to complete the project including localization into multiple languages, improve the in-game art, include a professional soundtrack, improve overall dialogue, and other small tasks that will make the game more whole. The game will be available for download on PC via Steam and if successfully funded on Mac and Linux as well.

Willy-Nilly Knight is currently live and available to support on Indiegogo: https://igg.me/at/wnkgame/x/15306975

About Double Dice Games
Double Dice Games is a very small, but very skillable INDIEpendent game studio, which contains of only two persons. We love computer games, and love to create them. Looking as our dreams and ideas take its physical form and ability to make people happy.