Larchmont, NY -- (ReleaseWire) -- 09/03/2019 --Cole Johnson, local cartoonist and creator of Cowie Comix, celebrated his largest fundraiser to date by selling original comics at the Larchmont Sidewalk Sale.  Cole aimed to increase awareness for his comic brand, while also raising funds for two non-profit organizations: charity: water and Pet Rescue. Issues of Cowie Comix were available for purchase in front of Raymond Opticians at 1921 Palmer Avenue on Friday, July 19 and Saturday, July 20, with a goal of generating $50 for each charitable cause.  When the sale ended on Saturday, the Cowie Comix effort was proven successful, with $101 raised for charity: water, and $175 raised for Pet Rescue.

Cole's display featured eight comic titles, including The Adventures of Andy 1&2, Moo's Crew, Takimusa's Quest, various issues of Luna the Dog, and one comic title making its debut, "Super Grandma" based on Cole's own grandmother.  Says Cole of the event, "People had questions about a variety of things, including 'What is Cowie Comix?' 'How much did you raise for charity?' and 'What is your long-term plan?"  Cole expanded to say that he will be answering these questions on his newly formed Facebook page, https://www.facebook.com/CowieComixOnline/. The booth welcomed over 50 shoppers, including Larchmont Mayor Lorraine Walsh and co-founder of 'Love Larchmont' Amy Sullivan, who said "Cole's work is creative and hilarious, but what drive to produce so much, and stand out there in the heat, talking to people all day… such an accomplishment!"

Cowie Comix, which first started selling original stories to the public in October 2017, has made a commitment to donate all proceeds to charity.  The first recipient of these efforts was non-profit organization charity: water, with more recent titles dedicated to Pet Rescue.  "My dog Luna has been a major source of inspiration for my comics," said Cole. "I got her from Pet Rescue in Harrison, and I'm happy to give back for the tremendous support Luna has been to me!" For more information regarding Cole's comic titles, email Cowie Comix Project Manager Phil Lohmeyer at phil@thecomictree.com. 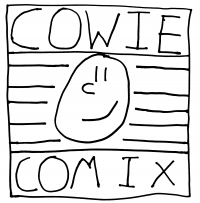 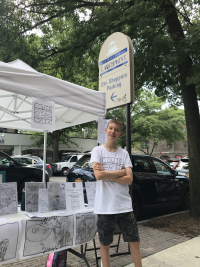 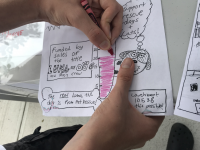 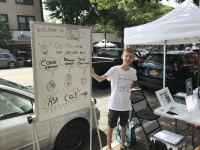