Las Vegas, NV -- (ReleaseWire) -- 09/09/2016 --Alexander Viazovtsev, Principal flutist of the Las Vegas Philharmonic, launched a Kickstarter campaign seeking support to form CAUSE – a world-class classical music festival. It's a musical celebration of arts through performances that will help expand the cultural attractiveness of Las Ve-gas while generating awareness to a charitable organization. The goal is to raise $111,100 by September 1, 2016. Funds received will be used to pay performers, website development with a live streaming feature, advertisement, venue rental, and sheet music.

Viazovtsev mission is to create the first ever physical and virtual fundraising con-cert. This will be a 6 Chamber Music Concert Series that spans across 15 days in the entertainment capital of the world, Las Vegas. It will include the richest musical examples of different time periods, styles and genres. The festival will evolve and adjust to the needs of attendees as the classical experience grows.

A CAUSE website will be developed to list performances, be the ticketing portal for the events, and provide access to live streams of concerts. Proceeds from ticket sales will be donated to a chosen charity. Users will vote for what "CAUSE" they want to support. The more money generated, the more is given to a charity.

Visit the Kickstarter campaign to learn more. Click here to make a contribution. Backers can choose from a number of attractive rewards. Perks will be delivered by October 2017. 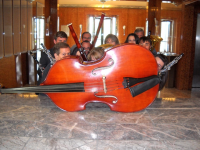