El Segundo, CA -- (ReleaseWire) -- 09/14/2017 --The young gun of the culinary world expands into meal kit delivery space. Logan Guleff, 15, has partnered with Chef'd to deliver meal kits of his signature recipes. Through the partnership, online shoppers can access the meal kits with all of the portioned ingredients needed to cook Logan's dishes with just one click.

"I am so excited to be working with Chef'd. I want cooking to be fun. And Chef'd makes it easy to have fun." says Logan. He adds," I want people to enjoy the meals and to be happy in the kitchen when cooking my recipes. I want people to smile when they taste what they just made." Logan's meal kits are available on the Chef'd website, along with Logan's winning James Beard sustainable mushroom burger, The Mushroom Monster Burger.

Since becoming the Champion of the 2014 MasterChef Junior with Gordon Ramsay, Logan has become a rising star in the culinary world. The cooking prodigy has been named one of the Most Influential Teens by Time Magazine. He was named Southern Living's Best New Southern Cook and earned a spot on Fortune Magazine's 18 Under 18 list. He's also the youngest certified judge for the World Championship Barbecue Cooking Contest in Memphis, Tennessee, and the youngest chef to cook at the historic James Beard House in New York City. And just recently finished judging the International Young Chef Olympiad in India and has released his first graphic novel cookbook, called "Cooking Dreams".

About Chef'd
Headquartered in El Segundo, Calif., Chef'd is an at-home, high-quality ingredient meal store that partners with celebrated chefs, media outlets and culinary influencers to create recipes that make it easy for anyone to cook like a pro at home. Launched in late April 2015, Chef'd was created to help consumers rethink the home-cooked meal by offering fresh, pre-portioned ingredients that aim to eliminate food waste and in turn cut consumer grocery costs, all without the hassle of subscription or membership fees. Chef'd branded recipes are currently available from noted chefs, health experts and renowned media publications. Follow on Twitter @get_chefd and Instagram @Chefd.

About Logan Guleff
Logan Guleff, winner of the national television show MasterChef Junior on FOX is the youngest kid to win the coveted tittle. MasterChef Junior is a premiere culinary competition that challenges kids age 8-13 and tests their culinary abilities and passion for food through a series of challenges. Out of 20,000 applicants, Logan won the tittle. Chef Gordon Ramsay, restaurateur and wine expert Joe Bastianich and acclaimed chef Graham Elliot were the Celebrity Judges. 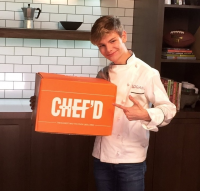