Concord, MA -- (ReleaseWire) -- 08/02/2021 --Action is set to start this week at the Thoreau Club. The club will be hosting the second annual pro tennis tournament in the Boston area starting August 2nd through August 8th. The Thoreau Tennis Open, in cooperation with the Women's Tennis Association (WTA) and the USTA will attract top-ranked players from all over the world, including those who will play in the 2021 US. Open. Players representing over 40 countries will compete for $125,000 in prize money which has doubled since the inaugural event in 2019. 2020 was cancelled due to Covid-19 shutdowns.

This year's competition is made up of top ranked lady's pro tennis and emerging players from around the world. The tournament favorite and the current highest ranked player, Sue-wei Hsieh (Taiwan), playing both singles and doubles matches in this week's Thoreau Open, recently took home the doubles title at Wimbledon in 2021.

Hsieh will be playing against some strong competition against Anika Raina (India) who has won two WTA titles throughout her career. Raina and Hsieh will be competing against a deep field including other notables such as, Kateryna Bondarenko (Ukraine) and Vera Zvonereva (Russia). Zvonereva, former number 2 in the world rankings will be the highest formerly ranked player at the Thoreau Open this week.

Zvonereva has 12 career titles under her belt and finalist appearances at both the US Open and Wimbledon. She also took home the Bronze Medal at the 2008 Olympics in Beijing. In doubles competition, she has amassed 10 career titles winning Wimbledon in 2006 and the US Open in the same year. Zvonereva has faced stiff competition throughout her career playing against such notables as Venus Williams, Caroline Wozniacki and Kim Clijsters to name a few.

The Boston based tournament is much needed, according to the WTA, to create and sustain professional level players locally who will be competing on the world stage. In fact, some of the players at the Thoreau Tennis Club will be vying to play in the US Open within a few years and this venue offers an up-close look at the talent that's soon headed there.

The Thoreau Tennis Open will be televised on the Tennis Channel during the entire week of the tournament from August 2 thru 8. While at the tournament, food, drinks and souvenirs will be available for sale. The venue offers convenient parking, ample seating and close up viewing of the action for families and fans alike.

A percentage of the proceeds will be donated to the: Sportsmen's Tennis & Enrichment Center located at 950 Blue Hill Avenue, Dorchester, Massachusetts 02124

The Sportsmen's mission is to build leaders on the court, in the classroom and in the greater community by providing academic, wellness and social development programs alongside recreational and competitive tennis instruction for youth and adults.

Free admission between August 2-6 and tickets for the finals can be purchased through Eventbrite here https://www.eventbrite.com/e/the-thoreau-tennis-open-tickets-63904596368

Since 1951 The Thoreau Club, Concord, MA has been helping families and individuals live active, happy, and healthy lives. We're committed to the well-being of our community and strive to provide the best in preventative wellness, fitness, and leisure. The Thoreau Club offers memberships that include fitness, aquatics, wellcare, tennis, camps, outings and events. For more information please visit www.thoreau.com 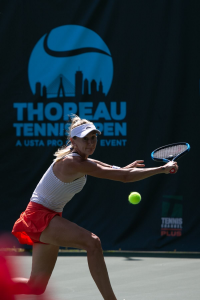