The 27th Annual East Norriton Holiday parade will depart from East Norriton Middle School, Roland Drive at 11:00 am sharp. The Famous BarberaCares Bear will be strutting along entertaining along the route on Germantown Pike as will the Gary Barbera Holiday Red Jeep Gladiator with the lovely Miss Montgomery County Lexi Brooks part of the Miss Pennsylvania Scholarship Fund riding along waving to the event participants and the ever-growing crowd. The parade will enter onto Stoney Creek Road and then onto Germantown Pike and proceed to Hillcrest Shopping Center. There will be many bands, floats, fire trucks, scout groups, Santa Claus and much more. View this annual fun Holiday event, and then join in at The Hillcrest Plaza for an afternoon festival of fun activities following the parade. A portion of the proceeds from this event will be donated to the "Patrician Society" aiding verifiably needy families and individuals in the greater Norristown Area.

According to The Patrician Society website the organization functions as a nonprofit, nonsectarian organization designed to meet the basic human needs of economically disadvantaged adults, children and families in our community. The Patrician Society will utilize volunteer workers whenever possible and will solicit private and public monetary and in-kind resources for use in the conduct of its programs.

To donate to the Patrician Society of Norristown: https://www.patriciansociety.org/

To see future and past holiday parades and charitable events that Gary Barbera and his BarberaCares Program and the Barbera Bear has partnered with www.garybarberacares.org or https://www.garybarberabear.com 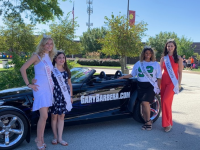