Kansas City, MO -- (ReleaseWire) -- 03/29/2016 --For the second year in a row, 360 Vodka has released a limited edition commemorative bottle in honor of the Kansas City Royals. This year's bottle is of course a nod to the team's thrilling 2015 championship season and features a label bearing the title "2015 World Champions" in addition to the MLB-licensed Royals logo.

360 Vodka is a proud sponsor of the Kansas City Royals. "We celebrate the Royals remarkable achievement first and foremost as true fans. It's a great honor to present this limited edition 2015 World Champions bottle to the Kansas City community that has remained loyal throughout the long 30-year wait between championships", said Mick Harris, president of McCormick Distilling Co.

Like all 360 Vodka bottles, the commemorative version is made of recycled materials and features a swing-top closure. Through the company's "Close the Loop" program, these closures can also be returned to the distillery in an envelope requested from www.vodka360.com. 360 Vodka will continue to donate $1 to Royals Charities for every closure received in the coming year. The first year of this partnership resulted in a $10,000 donation to Royals Charities, which will be formally presented at the Royals game on April 8.

The commemorative 2015 World Champions bottle is available at a number of chains and retail locations throughout the Kansas City metropolitan area while supplies last. Fans can also enjoy signature Royals cocktails the "360 Walk-Off" and the "Pine Tar Peach" at Kauffman Stadium and various local establishments.

About 360 Vodka
Award-winning 360 Vodka is the world's first eco-friendly vodka. Six-times distilled, locally sourced, and sustainably made, 360 Vodka's innovative distillation process helps preserve the environment by reducing waste and resource consumption. The bottle is 100% recyclable and features a swing-top cap that can be returned to the distillery for reuse. 360 Vodka is one of the premium brands of McCormick Distilling Co., a 160-year-old American-owned distillery in the heart of the Midwest. 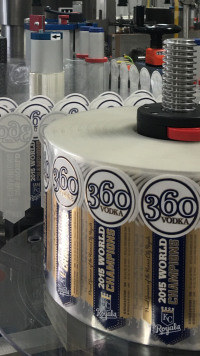