New York, NY -- (ReleaseWire) -- 01/07/2019 --Despite anecdotal claims about cheating, no study has shown that humans are predisposed to monogamy or non-monogamy. However, according to psycologytoday.com, between 1991 and 2008, somewhere between about 20% to 25% of men admit to having cheated on their wives. Rates of admitted infidelity for women have ranged between about 10% and 15%, compared to the 20 to 25% for men. Recently, 3rder team also disclosed a data, which shows the tendency of Human returning back to non-monogamy.

With the number of swinger couples and singles searching for non-monogamous dating going up, it is absolutely possible that non-monogamy might return to the cognization of the public. The increasing acceptability of non-monogamy does not connote the degeneration of human-being. It is just an exposure of human nature, which should not be deemed as a shame, not now, not in the future or the past. However, proved by reality, monogamy is still irrevocable and irreplaceable considering social order and all that matters regardless of the acceptability of non-monogamy. Therefore, it might be the best to keep non-monogamy as a kinky lifestyle which is allowed to appreciate occasionally until reality says otherwise. 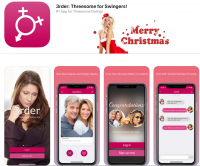