5 Steps on How to Prevent a Flood Disaster

Hempstead, NY -- (ReleaseWire) -- 08/22/2013 --With the imminent approach of the close and the worst of the ’13 Atlantic Storm Season (1st Jun. – Nov. 30th), and the catastrophic wake left by Sandy, it is of exceeding importance for homeowners to precaution their homes against flooding. For if the deluge comes, the deluge will not wait for anyone too late. And if a home has a basement, the basement becomes a sump and, the sump flooded, will flood the house. So to prevent or at least resist or even put off and mitigate flooding, these are five simple ways to ensure that the basement of a home is adequately prepared.

1. Clean:
The easiest and cheapest means of keeping flooding at bay is simply cleaning around the yard, removing dead tree limbs, and emptying gutters. Because the yard should flow directly to the gutter, rather than into the yard, a clean yard will allow water not to pool. If water begins to pool in heavy rain or rising water levels, it may seep into the pheratic zone and begin to fill the aquifer, possibly entering the house, and at least increasing the water level around the house. If the level exceeds the door, for example, water will begin filling the house, first filling the basement. Dead tree limbs ought to be removed because they may damage the roof or side or window of a home, allowing water to seep in and fill the basement. They may also damage power lines, and cut out phone service or power, perhaps disabling any sump pump in the basement. If the gutters are choked with leaves and debris, they will pool rather than drain, causing increased flooding around the house, rather than guiding excess water to the storm drain.

2. Install a French Drain:
In the event that water does enter the basement of a home, one very reasonable precaution to take is installing a French drain. A French drain, or weeping tile, blind drain, rubble drain, rock drain, drain tile, perimeter drain, land drain, or French ditch, is a drain below ground, surrounded by gravel or other aquiferous material, and a pipe perforated to allow water that builds up in a basement to be caught by the drain and quickly redirected, for example to a storm drain. Installing a French drain will increase the likelihood that ones basement will quickly be emptied of floodwater.

3. Sump Pump:
If a French drain is either not enough or may not be enough, a sump pump is the best option to dispense of water in the basement. The basin, during a deluge, is essentially a sump, or basin, where water, tending to flow downwards, collects. A sump pump is a pump placed in a sump to extract and dispose of water before it becomes a serious problem. It discharges water from within the house to storm drains, gutters, or other drains. They are operated either manually (one presses a switch) or automatically. An automatic sump pump initiates and begins to pump as soon as the water level around the pump reaches a certain level, and continues to pump until either it fails or the water level returns to a safe level.

4. Battery Backup:
In case power goes out, and the sump pump becomes useless, the next prevention strategy is a backup battery for the sump pump. This backup will switch on automatically, in the event of a power-outage, when the power stops, and allows for around ten extra hours of pumping. It is often a feature of new sump pumps to also come with a backup battery unit.

5. Backup Sump Pump
If power goes out and the sump pump happens to be damaged or fail completely, the last line of defense is buying and installing a second battery operated sump pump that is designed to initiate when the first pump fails. They are often less effective than typical sump pumps, and as well more expensive, but will substantially decrease the risk of total flooding of the basement.

With these tips, a basement, though not completely impervious to flooding, stands a much better probability to survive high and dry than a basement unprepared for storm season. 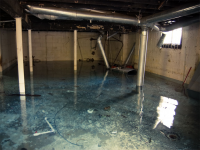