New York, NY -- (ReleaseWire) -- 05/30/2014 --It's been a long road to the release of Ed Hale's long anticipated new solo album, this being his first in the double-digits -- his tenth -- and the pressure of coming off of the success of both his last album THE GREAT MISTAKE -- with supergroup Ed Hale and Transcendence -- AND his last solo album BALLAD ON THIRD AVENUE which spawned multiple Billboard Top 40 hit singles, including the uber-popular “Scene in San Francisco”. This was a project Hale and company first began working on in 2012, intended to be a quick follow-up to capitalize on the success Hale experienced from his first foray into the Adult Contemporary radio format – a strategy that worked out tremendously well for the singer/songwriter.

A new Ed Hale Album is Definitely Coming out this year.This isn’t the first time this headline has been announced in the last two years, but it appears that after numerous stylistic changes, some forty songs later, and numerous tweaks to the track listing, Hale and band are ready to release at least one of the much anticipated new albums they’ve been working on over the last two years. Hale and longtime Transcendence bandmates, bassist Roger Houdaille and drummer Bill Sommer, recorded thirty-four new songs in total for the new album, which was meant to be quick and similar to Ballad On Third Avenue, acoustic and ballad leaning with a slight indie edge. But Hale insisted on pushing the envelope stylistically as he is prone to doing, which prolonged the “immediate follow-up” strategy. But word is that after two years and counting, there are at least 25 songs ready for release.

The New Album Will be in the Adult Contemporary Format still but has Edge. Hale has always found it easy to skate between a variety of different musical genres successfully, finding success at both College Radio and a wide selection of commercial radio formats. There was a wide spectrum of different styles inherent in the songs that Hale presented to the band for the new album, but the members paid attention to the dictates of Dying Van Gogh Records Manager Roger Houdaille, e.g. “keep the songs short, catchy and commercial and keep them in the Adult Contemporary format”. Hale evidently fought this every chance he got – at one point going so far out of bounds that Houdaille felt “the songs started to sound like Broadway Musicals…” and then Hale would request that the musicians “deliberately play your parts fucked up. Don’t make them perfect”. “Yeah, that’s Ed….” laughs Houdaille. “He’s never going to be satisfied with that polished sound,” alluding that the new album may be more experimental than originally intended.

Hale surprised fans – and some would say disappointed a few as well – by releasing the garage-pop/indie rock Great Mistake album in early 2013. Though the album was well received by critics and fans alike – debuting at #14 on the CMJ Top 20 Most Added Chart, it was as different from Hale’s solo album as could be – loud, raucous and lyrically brash. But Hale responded to critics of the move by citing that “that album was a BAND album… it wasn’t an “Ed Hale solo” album. The band has never stated we were going to stop making rock music just because I made an acoustic record!” It may take fans a few albums to realize Hale’s bigger-picture strategy of keeping the quieter material limited to his solo albums and relegating the experimental catch-all that’s been Transcendence since their formation in 2002 to the band’s releases.

The Name of the New Album. Since the start of the project Hale has been reluctant to attach a definitive title to his newest album. In fact Dying Van Gogh Records, Hale’s label for the last five years, wasn’t even sure whether Hale was releasing one, two or three albums at the same time, nor how many songs might be on each. It now appears that the artist will definitely release only one new album at a time over an unspecified period of time, the first one being entitled ANOTHER DAY IN THE APOCALYPSE. There is also a song on the album with that title that is said to be in the running for “first single”.

Hale is Still Hooked on making albums. Despite ever decreasing sales for full-length albums and the music industry leaning towards being more singles driven than ever, Hale believes that HIS fans still want and expect to experience music as “fully conceived works of art, like albums, rather than just one or two hit songs every year”. Hale has a long-time reputation for being overly perfectionist regarding how long and hard he will work in the studio to complete an album, making sure his albums are “not just collections of new songs, but fully thought out works of art, like a painting or a film”. Despite the album title, Hale’s team says that the new album is “surprisingly positive and more upbeat than Ballad On Third Avenue.”

This is Only the Beginning: From the start it’s been known that Hale’s intention was to release at least two new full-length albums from the 34 songs that the band originally tracked for his new album. And that’s exactly what Dying Van Gogh Records claims is happening. “We’re now working on two completely different and distinct new Ed Hale albums,” they report. “The first one will be the more electric and pop while still remaining acoustic-based, while the second one is slightly more acoustic and experimental.” Hale managed to slip several songs over six minutes into the batch as he is prone to do – which makes radio airplay highly unlikely, leaning in a more Dylanesqe direction than one would expect for an artist wanting to stay in the Billboard Top 100. But Ed Hale has been anything but predictable since he first burst on the scene almost twenty years ago.

Connect With The Artist: http://www.facebook.com/edhalemusic 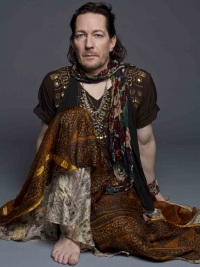