Hollywood, CA -- (ReleaseWire) -- 11/30/2017 --As British DJ Pete Tong performed his Ibiza Classics tour at Hollywood Bowl on November 11th supported by the 56-piece Heritage Orchestra, no less than 56 myMix personal monitoring units graced the stage. The Sussex, England-based orchestra travels across the globe supporting a variety of contemporary artists. When looking for a monitoring solution for each member of the orchestra, Fred den Dulk of Netherlands-based Next Level Audio looked no further than the myMix Personal Monitor Mixer system, which enabled each performer to easily dial in their personal preferences.

Despite such a high profile venue and complex stage production, den Dulk was assured there would be a perfect result from the outset: "The system is so easy to use and it always works," he observes. "We can always rely on myMix no matter how many musicians are playing — we know the system is going to work flawlessly every single time."

Each orchestra group member was provided with a selection of inputs on the myMix system including a stereo mix, a vocal mix, a direct out of their own instrument, a click track, and a communication line for the conductor, monitor and front-of-house tech to communicate with orchestra members. All in all, a total of 80 channels were used on the myMix network for the Tong performance.

"Basically, the orchestra members had five channels that they could choose from, but the system is capable of mixing 16," den Dulk explained. "The primary reason we chose the myMix is because it would be easy for the musicians to operate and it works as advertised."

When working with a large group — such as the 56-piece Heritage Orchestra — complex monitoring systems can create unwanted issues, particularly if they are too complicated for performers to operate on stage. For this reason, the myMix interface features intuitive channel names, simple buttons and a single knob to eliminate confusion.

"Musicians are there to play their instruments," den Dulk observes. "Monitoring is a necessity, but should never be a concern to the performer. There are a lot of systems that have too many buttons and controls."

In the case of the Hollywood Bowl performance, most of the orchestra members had never used the system — so den Dulk provided a brief overview: "Ron the monitor engineer then sets a couple of basic levels so when the orchestra members put on their in-ears, they could immediately hear their own instrument in context."

Both the front of house engineer, Tom Gelissen, and monitor engineer, Ron Peeters, enjoyed using the myMix because it enables musicians to focus on the music and play their best. It also makes production set-up and sound check even easier: "The myMix system finds itself on the network — you can just plug it in anyway you like it and it will work," he said. "It's really an intuitive, plug-and-play system."

RME to the Rescue

During the performance, the system uses three 96 kHz, 32-channel MADI streams and that are converted into two 48 kHz, 64-channel MADI streams. Those streams were fed into two RME ADI 648 units and converted to ADAT. "There were 80 channels, and the RME 648 can convert 64 channels, so we had 64 channels from one RME unit in use and 16 from the second one in use," explained den Dulk.

We are big fans of RME, and the ADI-648 was exactly what the situation called for," he continued. "These units have unparalleled reliability and never let you down."

A Performance for the Books

Thanks to the simplicity of the myMix, den Dulk said the show at the Hollywood Bowl went off without a hitch — and the mix sounded great. "This show was very special because the Hollywood Bowl is such a beautiful place. There's tons of history in this venue, but at the end of the day, we put the same care into this show as we do all our shows, and we try to achieve the best result no matter where we are playing. The mix sounded fantastic, and it was a performance to remember." 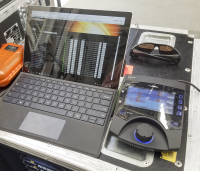