San Jose, CA -- (ReleaseWire) -- 07/31/2014 --Born to Indian parents in Dar es Salaam Tanganyika, on the coast of East Africa, Khatoon Gulamani had a dream. She wanted to become a writer. Now, at 82 years young, she has deliciously met this goal with the launch of her first book “Flavors of India & Africa”. Written to bring her family’s cooking secrets and traditional East African Indian recipes to a wider audience, the author comes full-circle. The book is a timeless journey and culinary amalgamation of Khatoon’s original recipes as well as recipes passed down over generations from her grandmother, mother, and mother-in-law.

To fulfill her lifelong ambition, Khatoon adapted traditional East African food for families like her own worldwide. Each with a corresponding picture, the rare recipes are easy to follow and easy to prepare. Recipes like mhogo, vipopo, thepla and dhebra give readers a rare glimpse into Tanzania’s gastronomic bounty.

“What a joy to pass along my family recipes for fusion cooking” says Khatoon,  “they’ve always been at the center of our home-cooked meals and parties. The traditional East African Indian style of cooking in this book is made for every taste.”

Described as “good food that inspires good family conversations” the recipes help these two factors work hand in hand. It brings to mind the obvious fact that Khatoon’s passion for cooking was inspired by her role as an affectionate and caring mother.  This is her finest legacy of all.

About Khatoon Gulamani
Khatoon Gulamani is the 82 year young author of the cookbook, “Flavors of India & Africa”. Born and raised in Tanzania, Khatoon shares 100 family recipes influenced by Indian and African cuisine, some adapted to American cooking styles. The recipes create a marriage of family tradition and authentic Indian/African cuisine enlivened with regional ingredients. 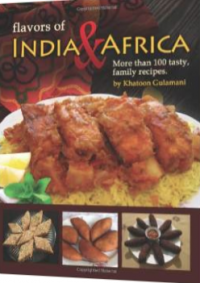