A Celebration of the Beauty and Miracle of Organ Donation. A Man Who Feels He Has Had 3 Lives a 19 Year Old, Who Saved 5 Lives and Many More That We Don't Even Know

West Bloomfield, MI -- (ReleaseWire) -- 11/07/2016 --Dr. Michael Hagan says he has had three lives. First, as an emergency doctor before getting Hepatitis B. Second as a Vice President of a 600 bed hospital until he relapsed with liver damage which brought him to his third life working for Gift of Life Michigan. The Emily Stillman Foundation has invited Dr. Michael Hagan, Director of Quality Improvement and Regulatory Compliance for Gift of Life-Michigan, to be the keynote speaker at on Friday, November 18th during Donor Shabbat at Temple Shir Shalom (3999 Walnut Lake Road, West Bloomfield MI 48323) at 7:30pm. This is a celebration of the beauty and miracle of organ donation.

After graduating from Midwestern University, Dr. Hagan began his career as an Emergency Room physician in Michigan. For nearly 10 years he enjoyed his work until he contracted hepatitis B from a patient in the ER. "At the time we didn't wear gowns, gloves, or goggles," Dr. Hagan told the audience. "I urge all of you to use the universal protection that is available."

His disease made it impossible for him to continue his career as a physician and it soon became apparent that his only treatment option was a liver transplant. He waited 24 months for transplant surgery. His doctors informed him that at the time of surgery his liver only weighed half a pound as opposed to the typical four to five pounds. "The surgery went very well and when I recovered I felt a renewed sense of energy and vitality that I haven't felt for years.

Without the transplant surgery, I would have had less than one week to live," he said. After his surgery, Dr. Hagan felt compelled to thank the donor family for making his life possible. Donor confidentiality rules are very strict and require that both the donors and recipients remain anonymous. Dr. Hagan wrote an anonymous letter which was delivered to the family by the Gift of Life organization. His initial letter was not answered. However, Dr. Hagan did not give up and the story about his search for his donor family could easily be a movie plot involving incredible strokes of luck, a horrific murder of an innocent bystander, and courtroom drama. While remaining respectful of donor confidentially, Dr. Hagan was eventually able to thank his donor family in person and remains in contact with them to this day.

"It's been 13 years since my transplant. Just the fact that I wake up every day, I say thank you to God and to my donor family," he shared.

In light of his own recovery and the work he does on behalf of Gift of Life, Dr. Hagan has made it his life's purpose to promote organ donation. "Currently there are 114,000 people waiting for an organ transplant and on average only 8,000 donors in a year," he makes clear whenever he speaks.

In February 2013, 19-year-old Emily Stillman was declared brain dead from a strain of meningitis called serogroup B. Alicia and Michael Stillman were informed that Gift of Life Michigan, the state's only federally designated organ recovery program, would be speaking with them.

After discussing organ donation with Rabbi Michael Moskowitz, of Temple Shir Shalom in West Bloomfield, the Stillmans decided to donate Emily's heart, one lung, both kidneys, her liver and her pancreas. The organs were donated to five people, ultimately saving the lives of all the recipients. Countless others were saved with Emily's bones and tissue. In death, Emily became a hero.

Following Emily's death, the Emily Stillman Foundation was created to raise awareness for organ and tissue donation so that one day there is no need for a waiting list. In addition, they advocate for all strains of meningococcal disease as well as all other vaccine preventable diseases. The foundation provides vaccinations for those who cannot afford them. In 2016 The Foundation adopted the third of the trifold mission, which is to advocate globally for all health and wellness issues. The Foundation has made an impact around the globe.

For more information about the event, visit http://www.foreveremily.org. 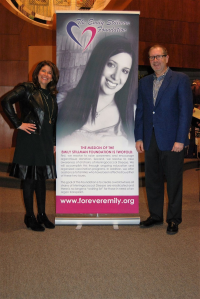