A New Way to Denote Humor in a Text Message

Washington, DC -- (ReleaseWire) -- 02/11/2016 --How do you fancy having a personal impact on the evolution of the English language? A new project has been launched on Kickstarter, giving members of the public a chance to personally influence a certain aspect of the English language - more specifically, the way that sarcasm or humor is conveyed in a text message - for which nothing currently exists.

Ben Norton from Washington, is encouraging people to use the caret symbol ^ when they type a message to denote that their intention is one of sarcasm or humor. Currently, no method exists to infer a sarcastic tone so a message can easily be misinterpreted by the recipient, for example, '^Rush hour traffic is just the best'.

Known as a Jestsign, the use of the caret in this way could become widespread enough to influence written or typed text, in much the same way as the hashtag, the question mark, or the exclamation mark. Originally, the hashtag was used to tag a keyword or phrase to help a person's comment show up more easily in a Twitter search, but its use has spread far beyond this intention.

Norton is urging people to start using the caret symbol on social media and in text messages to convey tone in this manner, if they agree with his idea. The English language is constantly evolving, and new words and ways to express emotion are constantly emerging with the proliferation of instant written messaging. Since we all contribute to changes in our language, intentionally or not, significantly or not, why not take this opportunity to influence it right now?

For a donation of $1 on Kickstarter, your name will appear as a backer and co-creator of the JestSign. The money raised will be used to maintain the website and compile a list of co-creators, and any extra money will be used to spread the use of the Jestsign - suggestions from donators are welcomed. Those that do not want to donate a $1, are encouraged to use the JestSign anyway if they want to - the real goal is for its use to become common place. For those who don't know, the caret symbol can be found on every keyboard or located under the symbols tab. 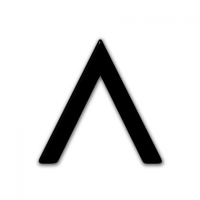