Washington, DC -- (ReleaseWire) -- 05/18/2021 --Indigo River Publishing is proud to announce the release of Richard Caldwell's latest novel, Out of Crisis.

Caldwell tells an exciting story about the not-too-distant future, when a radical new movement is poised to disrupt the corrupt two-party political system that has held power in the United States since the 1800s. Politically left of conservative and right of liberal, the new Centrist Party pins its hope for a better future on presidential candidate David Stakley, the former US secretary of state. As David assumes center stage with determination, intelligence, and humility, another kind of disruption rumbles deep below the earth's surface.

In Yellowstone National Park, one of the world's two super-volcanoes awakens with an explosive roar from a fitful 640,000-year sleep.

Through the eyes of several different players, author Richard Caldwell weaves a political/natural-disaster thriller around the collision of events that will reshape the physical and sociopolitical landscapes of the United States and North America forever.

Readers' Favorite had this to say about the novel: "…Richard Caldwell deftly captures the disastrous ramifications of a supervolcano eruption and masterfully demonstrates how a well-planned and active leadership can go a long way in minimizing the adverse impact of such an event…A pulsating page-turner, Out of Crisis seamlessly blends the thrill of disaster movies such as The Day After Tomorrow and the political maneuvering found in shows like The West Wing. The use of multiple POV characters makes the events seem realistic, and the non-linear narrative structure immerses you into the story further…Readers who enjoy political thrillers or books about natural disasters should definitely grab a copy of Out of Crisis."

About Richard Caldwell
Richard Caldwell is passionate about writing stories laced with adventure and intrigue. A retired army officer with twenty years of service and plenty of experience in demanding, high-adrenaline situations, including combat tours in Vietnam, he has amassed a collection of military awards and decorations: the Legion of Merit, Bronze Star, Vietnam Campaign Medal with three battle stars, Vietnam Gallantry Cross, and Airborne and Expert Field Medical badges, as well as numerous service and overseas medals. After retiring from the military, he served as a hospital administrator for twenty-four years. With a BS, an MBA, and a postgraduate fellowship in healthcare administration, and as a graduate of the US Army Command and General Staff College, Richard brings rigorous research to all of his writing. He has a black belt in taekwondo and is an experienced scuba diver who enjoys camping, fishing, kayaking, and riding his Harley Davidson. He and his wife, Patricia, live in Pike Road, Alabama. Out of Crisis is his second novel. His first, The Enemy of My Enemy, was published in 2018. 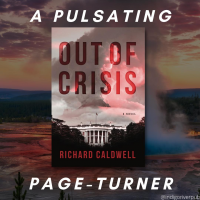