Sonarworks remains an indispensable tool for Needham, who maintains a world-class monitoring infrastructure at each studio

Los Angeles, CA -- (ReleaseWire) -- 07/31/2018 --Mark Needham needs no introduction for most people in the recording industry. A Grammy-nominated, multi-platinum producer and engineer, he has worked with the likes of Fleetwood Mac, Elton John as well as more recent acts including The Killers and Imagine Dragons. Clients are drawn to Needham for his innate mixing sensibilities and his relentless drive to help artists convey the unique emotional dimensions of their tunes. As an accomplished painter might rely on a discriminating set of brushes and nuanced colors, Needham relies on his own toolkit for mixing and monitoring — which for three years has included Sonarworks Reference software.

Needham maintains two separate studios: one in Los Angeles and the other in Nashville. These are more or less centered on the geography of his clientele, and each month he spends about two weeks in each studio environment. While the shape of these rooms are different, each shares a common equipment infrastructure: for example, the mixing console, the monitoring and outboard set ups are all similar, and both studios run Sonarworks Reference 4 on his Pro Tools 11 HD system.

Forging ahead in the mix
Very often, Needham will bounce between locations while working on the same project. "Since each room sounds a little different, this is where Sonarworks has become a helpful tool for me," he says. "Having the ability to work on something in L.A. in the morning, and then fly to Nashville and finish working on it during the night is no longer a challenge. I think, 'Oh, this still feels like the same song,' despite being in a different room, hundreds of miles away."

According to Needham, the most essential part of mixing is trusting his instincts and being confident in his decisions — whether he is working with Lindsey Buckingham, Chris Isaak or any other artist: "I want to believe what I'm hearing is what I should be hearing — and then make my choices really quickly based on that assumption. If you walk into a project and something sounds different, you tend to start doubting the choices that you've made, and this isn't productive. I like to be decisive and forge ahead quickly, without second guessing myself."

Are you hearing what I'm hearing?
Aside from being able to make critical mix decisions on his own, it is equally as important for Needham to understand what his clients are hearing — since in this day and age, they can very often be on the other side of the world. "I mix for a lot of people around the world, and I'm getting a lot more sessions over the last couple of years coming back to me with Sonarworks on — especially in the last year. I see more and more people using it. And if I can have a common environment where I can discuss the choices we are making, either in the bands' home studio or on the road in headphones, it makes it easier for both of us."

In the past, Needham's clients would be sitting in his immediate proximity while mixing. But now with more and more remote projects occurring and audio files being transferred over the Internet, Needham has turned to digital solutions such as Sonarworks Reference to help establish a common reference point everyone can agree on. Needham shares an extreme example of how communication can break down between the producer / engineer and the client:

"I had a band I was working with that kept referencing all these classic songs, and telling me I wasn't approaching the mix right," he continues. "They said that all these great songs, which I knew really well, always had the bass in the left speaker and all the higher instruments in the right speaker. I was like 'What are you talking about?' So I went to their house and found out they were listening to a speaker with a blown tweeter on the left and a blown woofer on the right. I'm like 'Oh my God…' And we've had been arguing for two or three days in the studio about how these songs were mixed."

The sharpest tools in the shed
Over the course of his 35 year career in the music industry, Needham has always been at the bleeding edge of new technology. Back in the late '80s, he was among the first to jump headlong into DAW platforms for digital editing — before the acronym DAW even existed: "I've always liked to try new stuff," he explains. "If it helps me, I use it. If it doesn't, I don't. When I made the jump to mixing in the box, most people thought I was a little crazy. Now all these years later, it is a completely different story — people see the benefits of coming back months or even years later to do recalls on a song. It was always harder on a console to be able to jump between nine projects in a day without recall."

Perhaps his greatest objective as a producer / engineer is to minimize anything that might get in between the song and the listener: "I try to make choices for the sound that help bring out the emotion in the song," he says. "To me, it's still important that we are listening to the same mix and that we are making the same choices — and these choices have to make sense on both ends of the phone or the stream. For the general listening public, I think Sonarworks SR is a great solution because consumers are going to understand the choices that the artist or myself made in the studio." 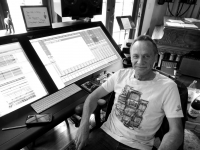