Six kids take a trip to the Grand Canyon, but instead find themselves in a whole other world in this teen science fiction film presented by Three Flames Pictures.

With story and screenplay by Patrick McEveety and Mark Blanchard, The lucky winners of a school raffle embark on an overnight field trip to the Grand Canyon but when their plane takes an unexpected detour through a wormhole, six kids and their ex-military pilot find themselves no longer on planet earth but a world away. In order to get back, they'll need to forge unlikely friendships, face their fears and trust a magic 'source' capable of guiding them on an adventurous journey home. But it won't be an easy journey home… Jonathan Mariande is Director of Photography with music by Mark Portmann.

A World Away is Dove Approved for all ages. Tickets to the CIFF 2019 Premiere April 6th at 3 PM are available on Eventbrite. The film will also play at the Myrtle Beach Independent Film Festival on April 26th, 2019. 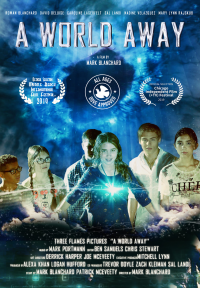