The Academy of Cinema and Television's child actor Rachel Dolan won and played the role as Carlotta in the film "Four Single Fathers," a comedy/drama directed by Paolo Monico.

Phoenix, AZ -- (ReleaseWire) -- 10/02/2008 -- The film “Four Single Fathers” centers on the bond between four men whose kids attend the same school. It was shot in Boston and New York and is co-produced by Mediaset and Gabrielle Muccino’s Los Angeles-based Indiana Productions. It’s the first English-language foray for Mediaset, Italy’s top commercial group, owned by Prime Minister Silvio Berlusconi and managed by his son Piersilvio Berlusconi. The Academy of Cinema and Television's Rachel Dolan was cast and did the filming of her character, Carlotta, in Boston.

Like most of the child actors that audition and are accepted to the Academy of Cinema and Television, Rachel Dolan has a passion for acting and she is what most acting instructors would call "a natural." Dolan loves practicing scenes. She finds acting fun and a very fitting creative medium for her personality. She enjoys expressing her feelings and role playing.

Also like many successful child actors, Dolan is involved in many activities. She plays the violin, ice skates competitively, is a member of a Gymnastics Demo Team as well as a member of a competitive cheer-leading squad.

Filming "Four Single Fathers" was a great deal of fun for Dolan -- her role as Carlota, one of the children in the comedy/drama about four Italian single fathers trying to cope with American ex-wives, children, family, and new relationships, was perfect for her. Classes at the Academy of Cinema and Television had more than prepared her for the long days of filming and the discipline needed for role.

Marin Dolan, Rachel's mom, said of the training received at the Academy, "the auditions and evaluations the kids had were invaluable. Being able to get feedback was so important to helping Rachel perfect her skills. It was an opportunity that you don’t usually get during the whole [film/tv] audition process."

"Four Single Fathers" is currently in post production and is scheduled for release in 2009 -- executive producer Pete Maggi said the independent picture will aim for a Sundance launch. 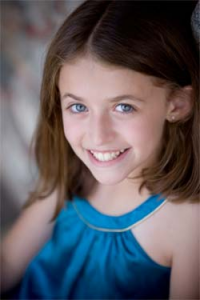