Tampa, FL -- (ReleaseWire) -- 06/13/2017 --There are certain types of occupations that are very necessary, but most people never think about them. Without question, crime scene cleanup work is one of these occupations. When a person watches a television show or a movie, one often sees law enforcement and coroner's officials milling about rather grisly, blood areas. There are outlines and tape and such applied by the investigators, pictures and fingerprints are taken, and it appears as though everything is under control. However, what happens to the crime scene after all the evidence has been collected?

Under these circumstances, a crime scene cleanup crew is going to be called in by the owners of the affected property. Since blood and other bodily fluids can transmit diseases, a specialized brand of expertise is required to be able to handle this type of cleaning. It also takes a high level of certification, because this is not the ordinary, run of the mill cleanup work. Plus, after the crime scene cleanup has been completed, the area that has been impacted must be restored to its original condition.

In the state of Florida, a company called Accident Cleaners and Restoration is rising to the top as the leading resource for crime scene cleanup in the Sunshine State. They serve a number of different cities, including Clearwater, Lakewood, and Tampa, and they bring a great deal of experience to the table. They have been building their reputation for excellence since 1999, and they mix compassionate and empathetic service with top notch technical capabilities.

Accident Cleaners and Restoration can be reached 24 hours a day, seven days a week, 365 days a year. This level of availability is something that says a lot about their commitment to the communities that they serve, and they provide rapid response times to emergency calls. The company really goes the extra mile in every way, and they are getting noticed by people within the industry. 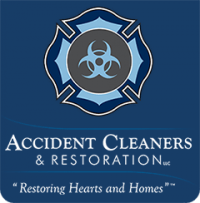