AcnePro1 ups the ante on clear skin with the launch of a new approach to the treatment of acne. Making use of a new development in anti-microbial technology called SilverSol®, the three-step process works for all skin types. cnePro1 says “works” is the operative word.

La Jolla, CA -- (ReleaseWire) -- 12/01/2016 --Since when has a battle cry been as simple as 1, 2, 3? Winning the war on pimples with a three-step system that chooses effectiveness as a working principle, AcnePro1 launches a game changer. "How so?" says the Proactive generation who's spent $1 billion in 2016 alone to fight the dreaded pimple. Well, keep it streamlined and just think something similar to Nano Silver for the skin. Using the latest in anti-microbial technology combined with a restorative acid the body's all to familiar with, the new skin care system is what one might call a bee line to clear skin. Step One - Clean. Step Two - Balance. Step Three - Clear. What could be simpler?

Designed to be used twice a day, the AcnePro1 system's powerhouse two is 20 ppm of SilverSol® formula and Hyaluronic Acid. Also known as the HydroSilver Skin Cream, this vehicle is number three in the AcnePro1 three-step process for clear skin. Proceeded by an acne wash that rebalances skin by lifting away dead cells, the first step starts a user on the road to restoring a healthy acid mantle; the skin's best form of protection against bacteria. Step two comes with a balancing toner known as the Repair Treatment Mist. Unclogging what the company calls skin congestion or the culprit to breakouts, the toner adds another useful layer to the healthy acid mantle. Now thoroughly cleaned, protected, and further bolstered by Salicylic, the pores are ready to follow up with the rejuvenating HydroSilver - A.K.A. the shortcut to healing.

Jay Scoratow, President of AcnePro1, said of the skin care system for acne treatment, "We're thrilled to give consumers the newest technology in a topical acne treatment that works. We're giving them an alternative to stripping the skin and drying pimples. That tact is antiquated and can be embarrassing as I'm sure those who deal with acne can attest. Instead, our acne treatment system maintains moisture balance while it continually hydrolyzes and fractures the excess sebaceous oils that can cause acne. That also helps to calm the daunting redness in acne prone skin. And because our skin cream contains a healing component that's naturally present in the body, in addition to the HydroSilver that utilizes patented technology, the system can be trusted to do its job. I can easily put my faith in what has been supported by over 400 studies."

About AcnePro1
AcnePro1 is a company based in La Jolla, California that provides the marketplace with a 3-step system for acne treatment that actively rebalances and restores the skin. 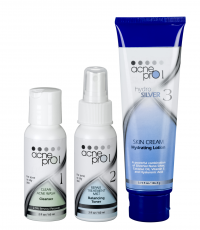