AJC Radio Is Proud to Highlight an Advocate for Justice, Congressman Hakeem Jeffries of New York on the Spotlight on Capitol Hill, Encore Series

AJC Radio looks back at the most exciting interviews with Members of Congress and their ongoing legislative efforts in the new Spotlight on Capitol Hill, Encore Series

"In July 2015 Congressman Hakeem Jeffries was featured on AJC Radio's Spotlight on Capitol Hill. In 2016, AJC Radio hosts had an exclusive interview in Washington D.C., and he personally shared his passion and initiatives with the American people," says Lamont Banks, AJC Radio Host. Criminal justice reform is a priority for Congressman Jeffries, and we appreciate everything he is doing to make a difference in this country. In 2017, we will update our listeners on Congressman Jeffries views and goals under the new administration for the Spotlight on Capitol Hill, Encore Series. Please join us this week as we highlight another champion and advocate for justice and equality," adds Banks.

"Hakeem Jeffries represents the diverse Eighth Congressional District of New York, an area that encompasses large parts of Brooklyn and a section of Queens. Serving his third term in the United States Congress, Rep. Jeffries is a member of the House Judiciary Committee and House Budget Committee. Jeffries is a Co-Chair of the House Democratic Policy & Communications Committee, having been elected to that position overwhelmingly by his colleagues. In that capacity, he is a member of the Democratic Leadership Team and helps run the messaging apparatus for the House Democrats. Presently, Rep. Jeffries co-chairs the bipartisan Intellectual Property Caucus and is a founder of the Criminal Justice & the Public Safety Caucus." (https://jeffries.house.gov/about/full-biography)

This past summer, Congressman Jeffries and Congressman Gowdy (R-SC), both members of the Judiciary Committee, introduced the "Renew Act," a bipartisan measure to reduce corrections costs and help young ex-offenders become productive citizens. Jeffries said: "This is a common-sense measure that will improve the lives of millions of people across New York City and this great nation. It serves as a ripple of hope that will allow hardworking people to get back to work and provide for their families. Representative Gowdy should be applauded for his leadership in this regard." The bill has widespread bipartisan support from groups including: The American Civil Liberties Union, Americans for Tax Reform, American Conservative Union, American Legislative Exchange Council, Center for American Progress, Faith and Freedom Coalition, Justice Action Network, Leadership Conference on Civil and Human Rights, Prison Fellowship, and Right on Crime. (https://jeffries.house.gov/media-center/press-releases/reps-jeffries-gowdy-lead-bipartisan-effort-to-give-ex-youth-offenders-a)

Congressman Jeffries is doing his part to express that change is crucial, and injustice is not acceptable. Congressman Jeffries understands that reforming the current criminal justice system is of the utmost importance to the American people. The things going on in America are shameful, and under our current leadership, America is divided more than ever. Congressman Jeffries willingness to speak out and address the hard truths, is what it takes to make a difference.

Rep. Jeffries was born in Brooklyn Hospital and raised in Crown Heights. He is a product of New York City's public-school system having graduated from Midwood High School and currently lives in Prospect Heights with his family." (https://jeffries.house.gov/about/full-biography)

Tune in this week and join AJC Radio hosts as we shine the spotlight on a true advocate for justice, and recognize Congressman Hakeem Jeffries key priorities and accomplishments," concludes Banks. 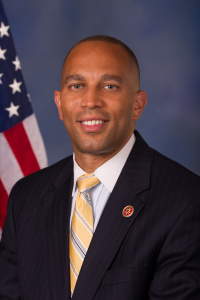