Alabaster Co. Delivers the Word of God in a Beautiful, Easily Digestible Format

Los Angeles, CA -- (ReleaseWire) -- 02/28/2018 --The Bible has long been the best-selling book in the world, but it's never been presented like this before. Alabaster Co. aims to intersect creativity, beauty and faith through publishing select books of the Bible.

The brand has already released the four Gospels, and the next project on the docket is the Book of Psalms. This book of the Bible features poems expressing the desire to know God and is one of the more popular books, even among those who don't consider themselves to be religious.

This version of the text utilizes the New Living translation of the original work. This delivers a fresh take on the text that is more suitable for the modern world, without sacrificing the true meaning of the original. This makes the Bible more accessible and understandable for today's audience.

Alabaster's book incorporates striking imagery and thoughtful design to deliver a fresh experience of reading the Bible. It presents the poems in a beautiful format that is more enjoyable to read than just standard text. The images are designed to provoke deeper thought about the text and the typeface includes plenty of white space for easy reading. The complete text will fill 232 pages.

To help raise money to cover production and printing costs, Alabaster Co. has launched a crowdfunding campaign on Kickstarter. The campaign has a funding goal of $40,000, which it has already exceeded. At the time of this release, the campaign has brought in more than $44,000 from nearly 900 backers. The campaign will continue until March 7.

Backers of the campaign will receive a variety of rewards. Starting at contributions of just $20, backers can choose from a selection of three art prints of images used in the book. For $30, backers can get their own copy of the book when it is released. This represents a 25-percent discount off the expected retail price of $40. Early backers can get both the Gospels and Psalms books for $45, a $75 retail value.

Once the campaign has reached completion, Alabaster Co. will finalize production of the book in March, followed by the initial printing run in April. The company aims to begin shipping rewards out to campaign backers in May. 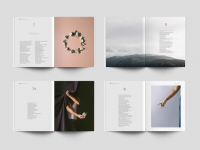