Amazon Announces the Release of Bait and Switch, a True Story About Domestic Violence and Survival

Bait and Switch has been described as one of the most gripping books of 2015, which tells the true story of how love turned into domestic violence. The book starts as a love story and shows what can happen when a woman meets and marries the wrong man. Domestic violence is shocking and continues to be one of those subjects that people try not to talk about. Bait and Switch, written by Lisa Carlson, tells her true story of how her life was turned upside down into a dark and murky world and how she came out the other side.

Dallas, TX -- (ReleaseWire) -- 01/15/2016 --A new book has been released on Amazon that tells the true story of how love turned into domestic violence. Bait and Switch, which was written by Lisa Carlson, is a true story of how the author who was looking for a man of her dreams fell in love with a man who was a fighter, not a lover.

Each year in America, nearly five million women suffer from domestic violence. Over one thousand five hundred women are killed by their partner each year, but still to this day domestic violence is a subject people do not like to talk about, and millions of women try to hide. One woman who went through domestic violence after falling for the wrong man wants to talk about it, and has written Bait and Switch to share her life story and how she survived.

The book tells the story of how Lisa was looking for love to make her life complete, little knowing that love with the wrong man could turn to physical and emotional pain. She met a man who hidden his true identity and fell in love, shortly after they married her nightmare began where she found herself in a world of violence.

All Lisa wanted was the happy ending every woman wants, a fairy tale wedding, and a man that would make it his aim to make her happy every single day of the week. What Lisa got was a man who wanted to control her, who wanted to break her spirit and deny her freedom. However, Lisa managed to find strength and survived.

The book has received five-star reviews on Amazon, Jennifer L Ward who purchased the book said:

"I could not put this book down, even to go to bed at night. A road map of warning to those who are considering internet dating, marrying someone you only have known for a short time. A clear view into how abusers manipulate their way into power. Lisa Carlson share honest and painful situations that are difficult to read! I applaud her transparency, and the times when she recognizes that her poor choices were as much to blame as the monster she married. May her honesty and shared experience save someone else this painful lesson!"

Bait and Switch is a must read, it will make the reader laugh, it will make them cry, it will even shock them believing such a thing does not happen behind closed doors, but more than anything, the true story will open the doors to the world that so many try to shut out. Lisa allows the reader in her own words to experience the life she went through and the victory when she regained her strength.

To learn more and Bait and Switch, please visit http://www.amazon.com/gp/aw/d/B011WZIUN0?ref=aw_sitb_digital-text 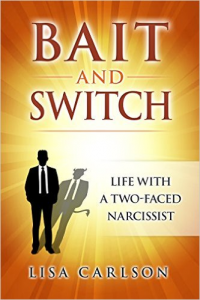