In times of consumerism where we keep on purchasing more and more electronics for our homes such as multiple TVs for each room in the house, multiple video gaming systems, surround speakers systems, more than one fridge and so many other electronics, Amazon customers report on discovering a fun and useful gadget as their new secret trick to save on electricity.

New York, NY -- (ReleaseWire) -- 04/25/2017 --WonderEsque, the company producing the "Light of Thrones" Motion Activated Toilet Night Light, reveals that a large majority of their customers use their product to save on electricity. Their customers reveal that they depend a lot on the smart-home device for saving on the electricity bill.

The new gadget is a motion activated toilet bowl light and it is used by both adults and kids during the night to prevent stumbling in the dark going for that unwanted yet so much needed wee. It does not plug to an electricity source, thus making it a smart-home energy-saving device. The great benefit is that it prevents consumers from turning on those blinding lights when waking up during the night and it is also great for potty training for kids. The gadget has a fun creative and very suggestive name, being named by its creators "The Light of Thrones".

Since it is sensor-activated only when it detects movement (infrared sensor) and when there is darkness, it is a great way to be supportive with the environment.

According to the company behind the success of The Light of Thrones Motion Activated Night Light, the creators have designed the light to be simultaneously dependent of darkness and movement. "We designed the "Light of Thrones" Toilet Bowl Light to be energy-saving and environment protective: it activates only when you come near it and it turns off automatically after 2 minutes. Our customers love it because they are in search of gadgets that are considerate about the environment", Nicole Smith, spokesperson for the brand revealed.

People often going to the bathroom at night will find this device very useful. Because there is no need to turn on the bathroom light, customers will soon notice that their electricity bills are lower than the previous ones.

Amazon customer Cheryl Berg recently said in a 5 stars review: "The reason for the purchase was exactly to save on electricity. Someone would get up in the night and leave the bathroom light on when they went back to bed. The grandchildren didn't want to be in the dark. Now the dark does not matter because the light sensor picks up movement from an impressive distance and it amuses them to have it turn on when they move. I have found that it is very nice to have that night light that turns off by itself rather than having it on constantly."

For more information about the revolutionary new spiralizer, be sure to visit www.amazon.com/dp/LightofThrone.

About WonderEsque
WonderEsque was founded in 2015 and from its inception, has been driven bys a personal obsession of their founders to make their customers' life "WonderEsque." Their products are edgy, influential, innovative in their field and more importantly, strive to give customers a happy-feet-good-feeling. 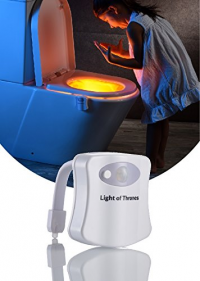 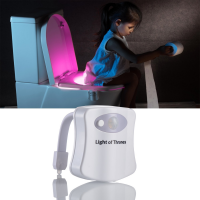