America Declares November 1 Extra Mile Day and Why It Matters

Los Angeles, CA -- (ReleaseWire) -- 10/28/2015 --On November 1st, mayors in 550 cities across the United States will declare Extra Mile Day…a day symbolizing the capacity we each have to create positive change in ourselves, families, organizations and communities when we "go the extra mile." From Nome, Alaska, to Rochester, New York, from Honolulu, Hawaii, to Salt Lake City, Utah, mayors in small and large cities have made the declaration.

About Extra Mile Day
Extra Mile Day was started in 2009 when Anderson, a motivational author and speaker, completed a solo ocean-to-ocean bike ride to symbolize the influence of the "go the extra mile" message. Along the 4,000 mile journey, Anderson held events in 21 cities where he interviewed over 200 people who had been recognized as going the extra mile in overcoming personal setback or who had accomplished something extraordinary. After the 90-day tour, Anderson personally gave $10,000 to those people whose stories he found especially inspiring. It was during this 2009 tour that Extra Mile Day was created with 23 cities making the initial declaration.

"We complain about the things we don't like in our lives, and we spend time wishing for better jobs, more money, and happier relationships," says motivational guru Anderson. "But all the complaining and wishing in the world won't change things. It's when we do more and give more than we currently are that we push the envelope of change in a different and positive direction." 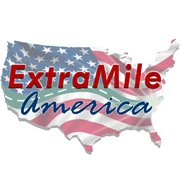