How To Repair Americas Infrastructure!

Clearwater, FL -- (ReleaseWire) -- 01/17/2018 --One of the most frustrating things about contemporary times is that people are unable to change their mindset as fast as technology progresses. In fact, as American design expert Donald A. Norman said, "Technology may change rapidly, but people change slowly." American photographer best known for his world famous photo of the "Afghan Girl," says, "Technology changes, times change, but the essence of the culture and the people basically stays the same."

The truth of these observations are self-evident. When decision makers are unable to leave their comfort zone and refuse to change with the times, it could well impact adversely on the entire nation.

A glaring example of such inflexibility is found in the manner of inspecting bridges in the US in the context of maintenance and repair.

The Associated Press enumerating the number of bridges in existence in the US in 2017, arrived at a total of 607,380 bridges in an updated National Bridge Inventory. Of these, 65,605 were described as "structurally deficient" and 20,808 were flagged as "fracture critical." A further 7,795 bridges were flagged as "structurally deficient" and "fracture critical," placing them at a higher level of danger of collapsing. Being "fracture critical," is scary, for it means that if even one vital component of the bridge is compromised, the bridge could just collapse.

The question arises as to why so many national bridges have been allowed to go downhill to such critical levels of deterioration in this manner.

It so happens that the Federal and State guidelines for manual inspection of bridges are about fifty years old. Furthermore, the inspection methods are extremely subjective, according to Doug Thaler, President of the robotic engineering firm, Infrastructure Preservation Corporation (IPC). For instance, it would be no surprise if 10 different inspectors give 10 different reports upon inspecting the same bridge. Thaler said, "That we still drag a chain across a bridge deck to listen for potential issues just seems archaic."

Thaler is challenging the current infrastructure maintenance scenario with modern technology and robotics, which will bring an element of objectivity, precision and timeliness into discovering deterioration in bridges. He points out that early detection of degeneration and timely repairs will help extend the service life of most bridges. It is akin to a stitch in time saving nine.

For long years, the United States Department of Transportation (USDOT) has been assigning the inspection of bridges to gigantic engineering firms. Once the projects are awarded, they are headed by Project Managers who have specific people under them who carry out inspections using methods that belonged in an era gone by. Accordingly, the government is charged for man hours expended on the inspection of bridges. That is the way things have always been done, and no one is willing to change the status quo, even though there is enough reason to seek change.

Currently, man hours expended is a huge cost component of bridge inspection projects. However, the use of robotic devices will significantly reduce man hours required for inspection. Therefore, it is inevitable that Project Managers handling USDOT projects will bluntly reject and resist the advent of robotic engineering as an alternative methodology. At the very least, they are not going to welcome robotic engineering with open arms. However, as Thaler says, if the senior management of these engineering organizations, is able to move with the times and be bold in embracing technology, the organizations’ profit margins could increase as much as 20-30% due to the cost savings of not having to rent bucket trucks, conduct night time inspections or pay for lane closures. In addition, using advanced technology in their bids will offer the engineering firm an advantage in much wanted technology points, giving them an edge on new bids. Expert marketing strategist Geoff Livingston says,” I see the movement towards AI (Artificial Intelligence) and robotics as evolutionary, in large part because it is such a sociological leap. The technology may be ready, but we are not – at least, not yet."

Nevertheless, one can postpone the inevitable only for so long. The advantages of technology will be realized sooner rather than later. As it is, Thaler has observed USDOT's interest in the absolute precision of quantitative data that robotic devices can provide. Furthermore, such quantitative data can be provided for the entirety of the bridge, not just for sections of the bridge. And the data is thorough and decisive enough to expose the problem minutely. This immediate and unvarnished presentation of the state of disrepair, will save USDOT unnecessary expenditure in the form of bloated man hours of bridge inspection. Also, resources could be immediately deployed for repairs as the problem has been identified. Technology thus purposefully applied, can extend the service life of a bridge by many years.

This aside, extensive repair and maintenance work on roads always leads to road closures, with heavy machinery creating congestion and possible safety issues for inspectors and for the public. Robotic devices, in contrast, do not require road closures and do not pose any danger to people in the vicinity. As such, technology is able to minimize inconvenience to road users.

The benefits of employing new technology are so obvious that such unswerving allegiance to outdated methods is mystifying, to say the least. What is more, as social media specialist Simon Mainwaring says, "Effectively, change is almost impossible without industry-wide collaboration, cooperation and consensus." On the other hand, American author Stewart Brand said, "Once a new technology rolls over you, if you're not part of the steamroller, you're part of the road."

As much as old habits are hard to overcome, survival requires embracing change. Building new bridges is a prohibitively costly exercise. Therefore, the custodians of the nation's infrastructure need to be committed to caring for existing bridges, taking advantage of new technology to maximize their life span. Engaging robotic engineering services is the way forward in bridge inspection. It will bring the changes that USDOT is seeking in terms of timely and decisive information, leading to high quality maintenance and repair as befits an age of technology. After all, technology does not drive change, it only enables change. 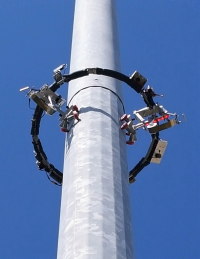