What if the leader of the free world turned the U.S. healthcare system into a depopulation lottery?

Van Nuys, CA -- (ReleaseWire) -- 02/13/2017 --MEDICA isn't just a book; it is a portrayal of possibilities. It takes on the existential threat mankind could be faced with through Artificial Intelligence. Could a depopulation lottery be the hidden instrument at play for decades, increasing the wealth of a small super elite of puppet masters while securing the growing gap between the rich and the poor? Could an elitist society control us through the current healthcare system and its vulnerabilities by implementing the secret and cynical depopulation lottery? Imagine a systematic elimination of human beings by determined sociopathic greed and a hunter's mentality.

Could their polar adversary MEDICA and the Chosen Ones countermine the coldhearted elitist society's actions by using advanced Artificial Intelligence to guide humanity to major breakthroughs in understanding, solving, and curing disease?

MEDICA is a high-concept book with a complex and expanding universe. Every chapter adds to the puzzle that the evil organization the Morris Alliance of Medical Anarchy (MAMA) weaves with its hidden threats, while also portraying MEDICA´s defense strategies. The methods MAMA's secret society uses are so clever and hard to detect that there is virtually no chance to discover them without the use of artificial intelligence.

Because MAMA possesses crucial patient data, its Medical Adjusters choose from a variety of possibilities on how to eliminate potential threats to their ever increasing and cherished wealth disparity formula.

The novel's philosophical undertone is the growing need to question the status quo of US-American healthcare, the realization of how vulnerable the system really is and the deeply disturbing notion that MAMA's agenda might be already at work, in one way or another. Moreover, what if a psychopathic leader gained power over a formidable country like the United States? What threat could he pose, not only to the safety of U.S. citizens but also worldwide? Is this leader among us today?

About MEDICA
MEDICA is a sacred organization that has developed a system containing the Universally Proven Facts of the leading medical and scientific geniuses in history. Their Artificial Intelligence Engine uses a highly advanced system of algorithms to track all potential cause-and-effect scenarios and has the ability to replicate disease while counteracting its actions. The technology literally mimics people's past and present state of health while predicting their future state, as well. As each life is different, the variables are constantly changing. Such apparently unlimited complexity cannot be handled by human brainpower alone, but with the advent of Artificial Intelligence, mankind can overcome its own limitations to advance human health. The writers portrayed this process well without the reader requiring standby Google searches.

Though technically complex, MEDICA is a story told through human drama and compelling characterization:

Gerard has been gifted with his mother´s brilliant crime-solving mind and the medical abilities of his father's talent for medicine. One day, Gerard will challenge the status quo of medicine. He provides insights and solutions to where all were being intentionally hidden from his peers. Gerard is holding the weight of the world on his shoulders. Despite his gifts, Gerard battles an enemy he cannot see and does not yet know exists.

Aimee is a young, beautiful and idealistic cardiologist. Her passions are her patients and diagnostic technologies. If there is a disease, she will find it. Coming from a principled upbringing rooted in strong family values, she is shocked when she learns the truth about who lurks in the dark, controlling the US healthcare system. She is entrusted with Mia, a heart patient whose beauty hides behind a mask that is defined by third-degree burns. Mia´s world experience is of shame as she is seen as a monster to our superficial double-standard society. Can Aimee find a way to help Mia take off her mask and reveal the beautiful self that lives beneath it?

Frank Morris is the leader of the Morris Alliance of Medical Anarchy or MAMA. Frank possesses the power to entice followers to adapt to his belief systems with remarkably little effort. His speeches hypnotize unsuspecting prospects. His serpent words slither around their destinies as they are easily forfeited without a leader's direction. Morris's towering frame looms over their strayed souls as he opens with his seductive speech.

Emma lost her mother to cancer when she was only four years old. She watched as her inventor father, Mark, used every means within his grasp to save her mother, but death won in the end. Or have both father and daughter realized that, in fact, her mother's fate was at the hands of MAMA? Home schooled by Mark, Emma learned the concepts of Leonardo da Vinci, who used nature´s genius as the mother of all lessons. Emma has a unique mind and an almost desperate passion for cheating death. She is determined and mentally strong – until the moment she meets Sarah, the little orphaned cancer patient in Room 2. Can she save her? Can they save each other in every way?

There are times within the story when the authors insist on pulling you, the reader, into the depths and history of often-painful events. The attempt is a success.

MEDICA is a politically charged book, however, it consciously avoids replication of any existing political party's agenda. The authors instead focus on political favors, their toxicity, and explore potential scenarios that could lead to the devices of people with malicious intent.

As a side note, MEDICA is an excellent primer on how the human body functions. The authors did a remarkable job in explaining both wellness and pathology in lay terms. As an example, readers may finally understand why their back hurts and how they can get help fixing it.

With political intrigue, action, drama, and sexual encounters that may be more than gratuitous, MEDICA leaves the reader excited about the Yang of what could be accomplished between the human race and Artificial Intelligence. It also warns us of the Yin of potential dangers should Artificial Intelligence ever fall into the wrong hands or under a leader who poses a threat to the world.

Follow Medica An American Crime Story in the Advent of A.I.

Medica An American Crime Story in the Advent of A.I. - Logo 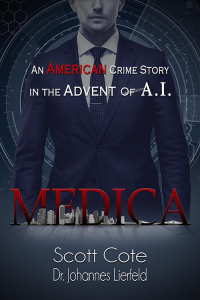 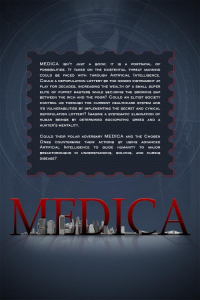 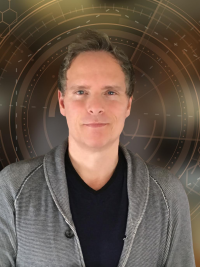 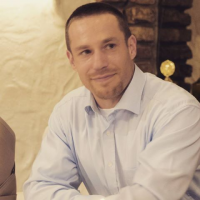