Tarzana, CA -- (ReleaseWire) -- 09/26/2016 --Post-production has been completed and all rights are available for the powerful pre-apocalyptic drama The Second Coming of Christ.

Jason London (Dazed and Confused), Diana Angelson (The Impaler, Armenia, My Love), Quinton Aaron (The Blind Side), Natalie Burn (Expendables 3), Al Sapienza (Sopranos, House of Cards) and Meredith Salinger (The Journey) are among the stars joining Golden Globe nominee Tom Sizemore (Saving Private Ryan) and Oscar nominee Sally Kirkland (JFK, Bruce Almighty) in the film about an atheist female scientist who, at the end of times, discovers that true Faith can bring miracles.

"The Second Coming of Christ revisits the fascinating and controversial decades-long debate about religion versus science; but with a timely, relevant and cautionary tale that incorporates the potential dangers of genetically modifying foods," said Anghelcev. "There are multiple layers to this film that people can relate to with many surprises along the way."

As gifted and passionate an actress as she is a storyteller, Diana Angelson stars as Dr. Beatrix Cera, a famous entomologist hired by New World Genetics Corporation, the leader in genetically engineered foods, to research the causes and effects of dying crops. Her findings indicate that after years of experimenting with food, nature has taken its toll and deadly mutations occurred within crops. The pollinators, mainly the honeybees, have spread these mutations to the entire plant kingdom, which means a slow, but total extinction.

Desperately trying to defy God by creating an "immortal gene" in Bees, Beatrix finds herself in an urgent struggle between evil and good.

We also introduce the former billionaire Dr. John Zachary, a Nobel Prize recipient for curing cancer, who has dedicated his life to help others by restoring their Faith.

John's belief that that "only through loving one another, people can have God forgive them and save the earth, together" prevails when he and Beatrix fight for her dying daughter's life… and all of mankind.

For further information on The Second Coming of Christ or to schedule a time to speak with Daniel Anghelcev or Diana Angelson, please contact Lauren Lewis at 818-970-0052 or llewispr@aol.com. 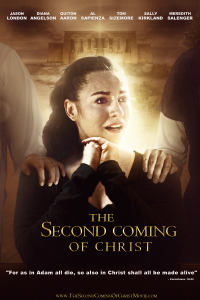