Baton Rouge, LA -- (ReleaseWire) -- 05/17/2016 --Angry Fish Rods, the revolutionary new fishing rod designed to be the simplest fishing rod every invented, is live on Kickstarter and raising funds to bring the project to life.

The Angry Fish Rod is engineered from the ground up as an entirely new concept in fishing rods. The invention represents the first reel change in fishing in over a hundred years. Angry Fish Rods combines the precision of a bait cast reel with the simplicity of a spin cast reel on a hyper-balanced precision tuned casting platform.

"I have spent a lot of time fishing from a little boy until now and what a great way to spend time with  family and friends. Through the years I've learned that to successfully catch fish you need to strategically cast your lure. I enjoy taking family and friends fishing but I have noticed that it's not always easy for everyone to master the control of  cast in fact It can be downright frustrating," says Pat Stewart, inventor and President, "I have always felt like there is a huge gap between the spin cast reel and the bait cast reel.  I've always wanted to have the ease of a spin cast but the accuracy and control of a bait cast.  I've spent a lot of time evaluating all the existing rods and reels and have found that the easiest ones to cast have very little control and the ones with the most control aren't so easy to master.  So I designed the Angry Fish Rod."

The result is the simplest and easiest to use fishing rod ever. The Angry Fish Rod changes the game by making fishing simple for everyone; from the youngest child to the oldest adult. Easy to hold and snap cast with just a flick of the wrist, the rod provides the ultimate precision. Children will love the ease of use and the control that allows them to learn to fish in record time rather than spending the day untangling the rod. If users have any injuries limiting their movement, the Angry Fish Rod makes it so they don't have to give up their favorite pastime as the AFR allows them to fish with a simple flick of the wrist.

Control of cast is incredibly fluid with the Angry Fish Rod; making it so easy and accurate that even the most experienced of angler will be impressed. Whether kayak fishing, structure fishing, or pond fishing, the Angry Fish Rod's intuitive design and ease of use makes fishing incredibly accessible for all. This revolutionized rod will have amateurs casting like a pro and the pros making the complex cast they've been looking for with ease.

The Angry Fish Rods crowdfunding campaign is currently live and available to support on Kickstarter: http://kck.st/1rROJnD

About Angry Fish Rods
Angry Fish Rods, LLC. was formed in 2015 by lifelong friends Pat Stewart and Dale Lott to change the way beginners and pros fish. Pat has over 20 years' experience as a machinist working with some of the most complex mechanical problems. His experience as a fisherman and trying to teach his kids how to fish, as well as, seeing others having problems casting, was the inspiration for the concept of the Angry Fish Rod. Dale is a product design engineer with vast experience in CAD, prototyping, and manufacturing. 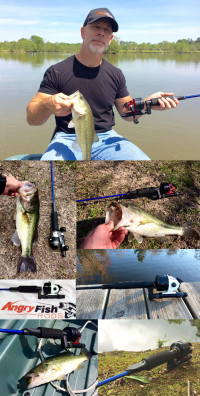