New York, NY -- (ReleaseWire) -- 10/30/2014 --(IndustrialPR.net) Several years ago, the American Board of Accredited Certifications assembled an independent committee to the address the quality and safety issues of firearms and armoring systems for military personnel, criminal justice agencies, U.S. embassies, and consumers. The committee learned there was a critical need for an improved quality management program among manufacturers of firearms and armoring systems which failed to be met by the quality management standard ISO 9001. As a result, ARM 9009 was released in 2013 as an industry specific standard offering major advantages over the 'one size fits all' ISO 9001.

ARM 9009 (http://www.ARM9009.com) is a highly specialized standard that has been universally accepted by firearms and armoring manufacturers and suppliers as well as companies that manufacturer or supply parts, components and materials to the firearms and/or armoring industry. ARM 9009 certifications apply to all manufacturers, machine shops, metal fabricators, welding shops, plastic molders, and suppliers of various parts, components, forgings, tubing, fasteners, metals, plastics and other materials used in the production of firearms and armoring systems. Companies who wish to become ARM 9009 certified must comply with additional requirements beyond ISO 9001 that are specific to the industry.

"ARM 9009 is not an extension of ISO 9001 but rather, a more robust and client-centered certification program in which audits are system-specific and precisely comprehensive to the firearms and armoring industry," said Henry Kroger, spokesman for ABAC. He added, "ARM 9009 focuses exclusively on the firearms and armoring sectors, and is the only designated quality management registration with this specific designation extending to federal, state, local, and international markets.

ABAC recently introduced its new ARM 9009 intro video (http://www.youtube.com/watch?v=WXx0IPwY0Fw) which showcases the safety, performance, integrity and strength in which the standard offers the firearms and armoring industries. ABAC plans to broadcast the intro on various cable news stations, television networks and online media to inform businesses and consumers of the importance of ARM 9009 certification.

About the American Board of Accredited Certifications (ABAC)
The American Board of Accredited Certifications (http://www.aboac.org) was founded by a group of quality professionals in 2003 with roots dating back to 1993. Today, ABAC is the leading independent accreditation board in the United States with association members, signatories, regional accreditation groups, and international observer organizations. With corporate headquarters on Madison Avenue, New York City, ABAC was created out of necessity to bring an independent oversight impartial of numerous so-called “official” accreditation boards. ABAC oversees accreditation and certification bodies assuring integrity, competency, and fair competition in the quality community. ABAC accredits certifications based on the fundamental principles of accountability, ethical conduct, and commitment to quality.

This news release was distributed by IndustrialPR.net 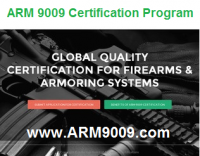