Armenia, My Love Is in the 2017 Oscars Race and Now Playing on Amazon Prime Where Users Can Watch It for Free

Silvia Leonetti, the composer, is in the competition for 'Best Score' against 144 other films. The short list for the actors include Diana Angelson, Shake Tukhmanyan and Maria Georoiu for female actors, as well as Arman Nshanian, Nazo Bravo and Anatol Rezmeritza for male actors.

The Director, Diana Angelson, who also stars in the film as a pregnant mother, centers her script on a young boy who escapes the genocide, makes it to the United States and becomes a successful Armenian-American painter. His works depict his childhood, family and struggles back in his native country.

"While 'Armenia, My Love' does expose the harsh realities faced by the entire Armenian people who were violently ripped from their homeland, it is 'Armenia, My Love's' strong messages of hope, love, faith, perseverance and strength that I wanted to prevail," Angelson said in a statement.

Earlier this year Pope Francis has met and blessed the Director and received a copy of the DVD or Armenia My Love. 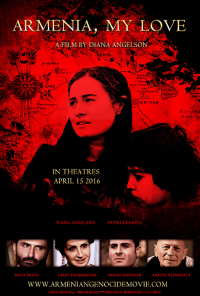 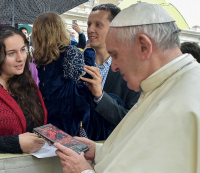