As art therapy emerges as an effective means of helping children, Art of Hearts, Inc. sets out to raise funds with a charming children’s book titled Out of the Box.

New York, NY -- (ReleaseWire) -- 09/26/2016 --Even in 1970, the Association for Supervision and Curriculum Development knew that books could effectively change a child's moral set.(1) Today the art form of developing children's books has been perfected, featuring clear morals, attention grabbing images, and an aesthetic designed to please. To help expand the moral set conveyed by children's books is Out of the Box by Jewel A. Tolbert, a Liberian native who emigrated to America at the age of six due to Liberia's Civil War. The book revolves around a crayon box Teacher and her diverse pupils depicted as colorful crayons. The mission is to show the value of both individualism and togetherness, while alluding to the unfounded tension between different people with physical differences. With Out of the Box, children can be both entertained and taught by brilliant visuals and a sound moral set.

Out of the Box begins with a colorful cast of crayon characters in a classroom setting with their trusty teacher: Ms. Boxy. The original characters seem to get along, but little do they know that a new student would be joining them. Soon comes Rusty, a brown crayon, unlike any of the other crayons. From there Out of the Box follows Rusty's struggle to feel accepted. The plot's structure is simplistic enough for children to grasp; yet it features enough social commentary to make an impact on the reader.

The book itself has been written and illustrated by the Art of Hearts, Inc. staff, and will be published and printed later this year. But to reach this goal, Art of Hearts needs help. As a non-profit, the upfront costs of printing a book without orders is simply too large. To remedy this issue, Art of Hearts has turned to Kickstarter where those interested can pre-order the book and receive a variety of perks, including thank you letters from the children they serve and high-quality T-shirts. Monetary patronage is by no means the only way to support Art of Hearts and Out of the Box, simply spreading the word about the campaign is greatly appreciated. With the support of readers Out of the Box aims to teach children lessons of togetherness and support Art of Hearts in purchasing art supplies and providing art therapy workshops to children in developing countries, such as Liberia and Ghana later this year. To find out more about Art of Hearts, Inc. and its projects visit http://www.artofhearts.org.

About Art of Hearts, Inc.
Art of Hearts was founded in 2014 with mission of aiding developing countries through art therapy workshops. The non-profit realized that many developing educational environments simply do not have the funding to support an art curriculum, so it has taken it upon itself to provide this foundation. Each year Art of Hearts partners with a selection of schools, improving the livelihood of the area, as they strongly believe in the therapeutic power of art and the outlet it provides.

For more information or to support the book visit the Kickstarter campaign page. 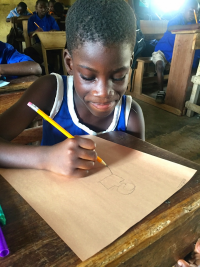 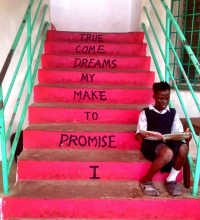