Ashley Gold of PawnChickShopping.com Changes Her Life and Is Now Giving Back to Heart Transplant Teen Trevor Sullivan with a Specially Designed Beaded Bracelet

West Bloomfield, MI -- (ReleaseWire) -- 10/31/2016 --Ashley Gold changed her life 180 degrees when she looked in the mirror and with her height of 5'3" she had reached 180 pounds. The former reality television star of TruTV's Hardcore Pawn decided to make a lifestyle change. She knew that if she made a huge, drastic change and thought about this as a "diet" she would be miserable. "I started with cutting out soft drinks. I cut out red meat, and then I cut out desserts."

Gold cut out snacking after dinner, and she committed to cooking at home and when dining out she looked at healthier options instead of fast food. She committed to making small, incremental changes to her lifestyle because as a mother, wife and businesswoman she wanted to be healthy and present and that meant starting to put exercise in her life too. Gold started to work out, gradually at first walking. With each new accomplishment, she would ramp up her plan, but just slightly and never in an aggressive way.

Once the weight began falling off, she eased herself into a regular exercise routine. "Slowly, when I started seeing the weight drop, I thought, 'I'm not going to fail!'". Soon the walking became running, and she just completed the Talmer Bank Detroit Free Press International Half Marathon.

Probably the most noticeable new look on Gold is her smile. She spent nine seasons on the popular reality TV show, screaming and making deals and then decided to walk away from the show due to what she calls a real reality check on her health.

Her work time is now her own, but she has not slowed down. Her new look brought about a whole new business. Most recently, Ashley Gold founded Pawn Chick Shopping (http://www.pawnchickshopping.com), the go to source for the latest jewelry fashions from 20 top designers. Gold has spent her life finding, evaluating and telling the world about the hottest jewelry and accessories to wear. Now those amazing bracelets, necklaces, earrings, bags and more are available at her website so everyone can select that perfect piece to add to their wardrobe!

With her turnaround appearance and new smile, Gold knows it is her time to give back. It is an important lesson she wants to teach her two children. Gold announced a specially designed, beaded bracelet just in time for this holiday season in support of Trevor Sullivan. The 15-year-old Sullivan received his new heart in November 2015 and was doing very well until July, when he began fighting what doctors believe may be a rare reaction to a viral illness. As a result he spent almost three months in C.S. Mott Children's Hospital in Ann Arbor. To help the family offset medical costs, Gold has designed a one-of-a-kind Team Trevor Bracelet of which a portion of the proceeds will help to support the Sullivan family.

Sullivan had a successful heart transplant after unexpectedly going into heart failure in early 2015. The nation got to know Trevor as the boy who woke up from his surgery to say "I never felt so good, it's amazing." Post-surgery he did very well until the summer of 2016, when he had a set-back first becoming very week while walking and then losing the use of his legs. After many tests and intensive therapies at C.S. Mott Children's Hospital where doctors came to the conclusion that Trevor suffered a viral illness which attacked the nerves in his arms and legs.

"Like so many people, I have been following Trevor's journey closely, praying he will make a full recovery," said Gold. "In the meantime, I wanted to help his family in a financial way, and in an emotional way for Trevor – who I hope will be moved by the support of the community as he sees so many of us wearing his bracelet." The bracelet represents his love for The University of Michigan (blue) and the strength he has had through his transplant process (black) along with his initial.

The Team Trevor Bracelet is available exclusively on http://www.pawnchickshopping.com and features matte black agate beads with one blue cat eye bead and a lead free pewter charm that features the letter "T," on a stretch bracelet. On the Team Trevor page on Facebook you will catch a glimpse of Sullivan with blue hair for fun and his many friends at Birmingham Public Schools supporting him with blue Team Trevor shirts during a 'Blue-out day (blue is Trevor's favorite color).

The family has had a Go Fund Me page for some time since Sullivan's father, Phil Sullivan, stays with son throughout all of his hospital visits while mom, Kimberly, looks after the family's remaining three children. This latest prolonged hospital stay has added physical and occupational therapy, adding to the already overwhelming financial hardship for the family with loss of wages Phil has incurred and mounting medical bills. "We were so happy when we heard that Ashley wanted to help. It really means so much to us and to Trevor that people care – plus Trevor loves the new bracelet and can't wait to see photos of people wearing it," said Sullivan.

For more information on the Team Trevor Bracelet go to http://www.pawnchickshopping.com. The bracelet costs $20. A portion of the proceeds from each bracelet sold goes back to Trevor's family. Supporters are encouraged to post photos to Trevor's Facebook page, wearing the bracelet, https://www.facebook.com/groups/TeamTrevor/ or on Instagram @team_trevor.

Donations can also be made to Trevor's Go Fund Me page at https://www.gofundme.com/TEAMTREVORSULLIVAN.

About Ashley Gold
Ashley Gold frequently blogs and speaks about jewelry fashion in the media, and she also interviews Hollywood's who's who on her weekly radio show, Pawn Chick Radio. Gold continues to travel the world doing appearances, appraising items, and spending time helping clients through her social media consulting practice. 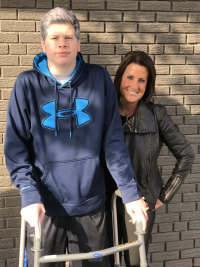 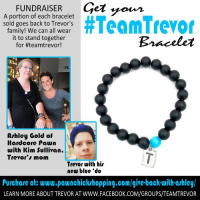