Atticus Li: The Enigma of Poetry and Meditation To Attend Prestigious Forbes 30 Under 30 Event

Wilmington, NC -- (ReleaseWire) -- 06/11/2019 --In this day and age where you expect to see tons of images and videos that flaunt travel escapades, display go-getter lifestyles, and encourage wellness, coming across woven letters, rhyme, free verse, and even measured prose is a breath of fresh air.

The rise of Instagram poets, more popularly known these days as Instapoets, is an ongoing controversy. But the writers behind lines that evoke thought and feeling at the same time continue to proliferate. Others take the anonymous road and bleed out poetry in the dark. Afraid of criticism, they take comfort in knowing that their poetic identities are kept hidden.

And then there are those who dare to step into the spotlight, expose their naked self, and embrace their written art.

Atticus Li is a 24-year-old senior Economics student with a remarkable artist for an alter ego. A self-confessed poet, he has filled his social media account with poems that speak to the readers, much like a friend tells you a story – raw and full of emotion. He defies the silence bandwagon and voices out his thoughts with every poem he creates. And he has a knack for playing with words and turning them into combos of emotional expression.

Among the bold names that stand behind their poetry, this millennial from Wilmington, North Carolina dares to place his name under his work, much like other men and women beyond his age who dabble in this written art form. In unison with other writers, he brings poetry closer to his peers and other readers who share the same love for modern prose. Using a minimalist approach, Atticus Li undoubtedly joins the ranks of authors poised to breed a new generation of literary lovers.

Aside from his strong online presence, what leads every reader into his artistic and poetic lair is his enigmatic aura. You can sense this the moment your eyes land on one of his poems. There is something about how he conveys love, pain, and a myriad of other feelings that will make you want to read more. For the lack of an appropriate term, you get hooked as you dig deeper into his poetic gallery.

His poems have this certain resonance. The kind that makes you want to consume more, then stirs you into thinking. Not the read-between-the-lines kind of thing, but that which makes you want to examine your life as a whole. He knows how to conjure the power of poetry and turn normal, everyday scenarios into magical bits of reality. When you look closer, each verse is incomparable, yet utterly relatable.

It may have been through Li's allude to a female subject, that his personal take on prose strikes a chord to everyone. That girl whom every man wishes to win, and the same one that every woman wants to be. One by one, his words describe his significant other. Divulging secrets about how he was captivated by her. He veers away from the masculine grip and acknowledges the feminine vulnerability and strength. Then, unknowingly, his narrative strings you along, making you wonder how his love story goes.

And like everyone else, Atticus takes the rollercoaster ride of emotions, and he brings you along with him. He uses vivid details and harnesses simple verbs to make phrases come to life. It's like he is telling a short story, only, he writes in the form of one-of-a-kind poetry.

He revives the dying art of rhymes and free verse and uses it to paint beauty, to scrutinize imperfections, and to relay acceptance.

"To sin is to live

"Love is the gentle

But perhaps there is another more pressing reason behind his poetry's allure. Time and again, having an identity to project and distinguish yourself with has made authors make a name for themselves. For Li, his emanates light, as opposed to others who take on writing with a darker, more pensive tone. He writes about love and loss, pain and healing, as it is, but does it in a way that does not stain your hands with blood and guilt. He gives you a glimpse of his unrequited love, hints subtly at intimacy and profanity, yet does not, in any way, leave you questioning your standards of morality.

And it may even be well worth noting that the millennial poet in Atticus Li seems to have found peace with his own internal monologue, as he states,

Thereby making his work reek of nothing but honesty.

And this admission that his writing is not fuelled by validation nor is it silenced by rejection is encapsulated in his call to other writers,

"True beauty is the artist, not the art. Live your way that reflects your poetry, and know that you are more beautiful than your work."

He then goes to add substantial literary advice by saying,

"Trying to write something perfect that people will like. There is no point chasing after attention; good writing is like any art. Great art does not seek attention, and attention seeks real art. "

It is this pure courage and raw authenticity that makes his poems all the more interesting. After all, he is part of the generation that supposedly perpetuates selfies and social media (something that the society thinks is a loop of endless narcissism), so his genuine literary inclination sparks curiosity and attraction.

His writing process is just as enigmatic in nature,

"…ideas would come to me in moments of existence, it could be when I am wine drunk and thinking back on all of the moments that made me feel something. It could be when I am traveling, and out the car window I witness the beauty of the mountains, and the words forming a verse under my breathe."

At the same time, his fascination with philosophy and the universal themes in people's lives is reflected in his work.

"I believe that philosophy was created to comfort the living. As a follower of Buddhism and Stoic philosophy, I wanted to engage in meaningful conversations with people during my travels. Often just met strangers would open up their struggles and deepest secrets to me, and I would comfort them with words of past philosophers. No matter how much the world has changed, us humans will face the same struggles that people before us have faced. At times we will find ourselves living not as our authentic self, loveless, anxious, depressed, worried... My hope is that the world will appreciate philosophy again, and use the oldest form of psychological therapy to improve the human experience."

A display of altruism,

attempts of moving on,

"No reason to judge

These days, Atticus Li shares his space on the world wide web with friends and fellow artists. He encourages contributions and collaboration from like-minded individuals who want to express themselves in their own unique poetry. He proposes a union of thoughts to transcend gaps and stigma amidst societal issues,

"...However, I feel a deep calling to bridge these divisions in our society. ??

Men and Women face different struggles in life. Supporting one cause doesn`t diminish support for the other. ?

To advance, we must go together."

But the ingenuity does not end there.

From writing poetry, Atticus Li's flair for the craft ventures into visual art. Particularly, he exhibits his fondness of the human nature by taking portrait photos. And just as portraits are made to reflect both subject and photographer, Li's photos speak with reverberating volume. More than a play in lighting, hue, and tone, Atticus Li stunningly captures that vulnerable and wry smile, distant stare, and candid laugh. It's as if he tells you through the lens that he sees your complexity and vulnerability. And later, tells you of your innate beauty.

His works reflect diversity and variety, not just in background and scenery, but also in the people he includes in his gallery. His portraits include both men and women, of varying race and ethnicity. He displays emotions that range in intensity. And he uses his skill in photography to relay a message in each image.

Indeed, Atticus Li marries two beautiful art forms as he calls both of them his own. And while others might expect mediocrity because of his artistic duality, Atticus Li proves that visual and written art can coincide within one soul. All it takes is the right amount of passion and determination.

Ultimately, his poems and photos attest to his zealous passion which moves his audience and clientele:

"The soulful words and the vivid pictures craft a beautiful medley of emotions. Keep it coming. Love your work."

"Not only is he multi-talented but Atticus certainly has a way with words that can be felt by anyone! He's such an inspiration!"

All things considered, Atticus Li's work shows that he is an up and coming poet-photographer who exhibits both talent and passion. The philosopher in him triggers his innate curiosity, while the natural writer within carves out his thoughts. For a person who views his profession as a never-ending passion project, Atticus Li will surely never run out of innovative ideas to constantly fuel his artistic journey.

About Atticus Li:
Atticus's voice connects with those who seek to find the profound truths of the Universe and who wish to explore more of their own infinite vastness while on their journey through life. His reverence for the power of language and his growing mastery of his craft points to a bright future for Atticus in the world of poetry.

For more on Atticus and his work check out his website or find him on Instagram. Atticus will be in attendance at the prestigious Forbes 30 Under 30 event this year and is eager to connect with other like-minded individuals. Atticus Li is currently on track to complete a degree in Economics in addition to his artistic pursuits. This well-rounded witness to life's magnificent dance has only just begun. 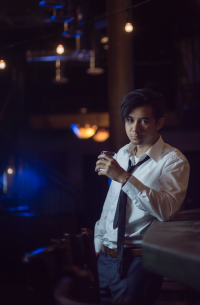 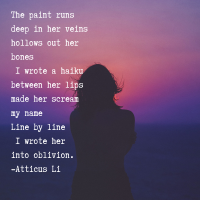 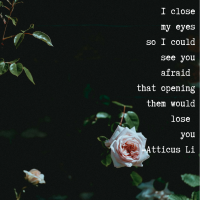 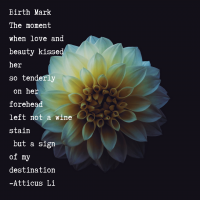