LoRusso, Author of When Cops Kill and Peacemaking Offers Insight in Blue News on What Happens When Law Enforcement and the News Media Interact

"Almost daily, in the news there is a report of an officer-involved incident and how the media reports it shapes public opinion," said Lance LoRusso. "We have seen this firsthand in the Michael Brown shooting in Ferguson, the tragedies in Dallas, and many more. Blue News is designed to explain this interaction between the media and law enforcement, as well as how law enforcement can develop a communications strategy to work with the news media through traditional and social media."

About Lance LoRusso
Lance LoRusso is a law enforcement officer turned attorney. Having worked as a street cop, trainer, hostage negotiator, public relations officer, and investigator, he regularly trains law enforcement officers from around the United States. As an attorney, he responds to the scene of officer-involved shootings and represents officers through interviews with homicide and internal affairs investigators as well as grand jury hearings.

Blue News is currently available for preorders at shop.booklogix.com/Blue-News-7106.htm. 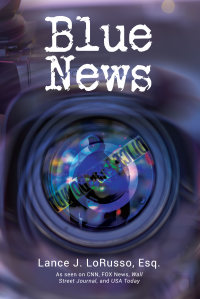