First Book to Win Awards for Both Fiction and Non-Fiction!

Miami, FL -- (ReleaseWire) -- 11/21/2014 --This weekend Miami streets will bustle with excitement and activity as authors, publishers and book-lovers of all ages explore the literary offerings of the Miami Book Fair International. One of the largest book fairs in the nation, the festival is expected to bring more than 200,000 visitors, 600 authors, vendors, food trucks and street music. But one thing that makes the 31st Annual International Book Fair different from all the others is a history-making moment in the publishing world.

On Saturday night, November 22, Carew Papritz, author of the award-winning The Legacy Letters will receive the Readers’ Favorite Award for Best Inspirational Fiction at the Miami Regency Hotel. After recently winning Non-Fiction Book of the Year from Reviewer’s Choice Awards and several other notable non-fiction awards, this marks the first fiction award for the author -thus, making it the first time in publishing history that a book has won in both fiction and non-fiction categories. No other author, including the 600 attending the Miami Book Festival has ever been bestowed such an honor.

Although The Legacy Letters is a work of fiction, it is being interpreted as an inspirational guide book because it taps into a real desire to understand life’s important questions and appeals to people who are hungry to find meaning in their lives. While books of this nature are usually relegated to the self-help section, The Legacy Letters reads like a true-to-life story and is filled with timeless wisdom for the modern age. It is told through a series of personal letters written by a father who would never live to see his children. These letters ultimately serve as the children’s practical, moral and spiritual guidebook for their entire lives offering bite size morsels of advice on life, love and everything in between.

As read in many reviews, the book responds to a growing need people have to reconnect with family and friends. For other reviewers, it emerges as a powerful and poetic emotional journey that speaks to the difficulty, beauty, and depths of living life to its fullest. “It is easy to get caught up in our fast-paced, 24/7, technology-drenched society…This back-to-basics book reminds people how to slow down again, be in the moment, and remember what is really important in life.” says Papritz, who urges everyone to join on the “slow life” movement and create a “legacy life.”

About Carew Papritz
Best selling author Carew Papritz left his career as a filmmaker in Hollywood, and returning to his ranching roots, worked as a cowboy on a cattle ranch in the Southwest where he began writing books. He is now known as the “Cowboy Philosopher” and his new book, The Legacy Letters recently made publishing history as the only book to win awards in both fiction and nonfiction categories. A Renaissance Man in an age that lauds the specialist, The Huffington Post says Carew “intrigues and enlightens, charms and catalyzes change for every reader.” 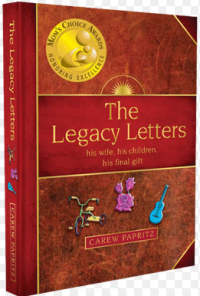