Endeavoring to spread a very practical approach to self-improvement, author Justin Spalla releases his inspiring book “A Tribute to Friendship We are One of Many”. The author motivates readers with his own story of overcoming a learning disability and serious vision problem. Striving for success, Spalla describes how he rose to greater productivity levels by making one consistent small change.

Avon, CT -- (ReleaseWire) -- 03/24/2015 --Giving a motivational look at the way one small change can effect the outcome of an entire life, author Justin Spalla releases his first book. Entitled "A Tribute to Friendship We are One of Many" Spalla takes readers from what was first a suicidal mindset, to a productive life of purpose. To that end, the book is an inspirational story of simplistic acts of self-improvement. In this, his motivational book, Spalla shares the wealth of his experience in what ended up to be a ten year act of love.

Discovering hope on every page, Spalla's book starts by sharing his childhood hopelessness. Suffering the consequences of a debilitating learning disability coupled with a serious vision problem the author was, at one time, barely able to read or write. Giving up on anything better than menial labor as his life's work, Spalla felt meaningless as early as age ten. Filled with fear, he believed he would be a burden and disgrace to his family.

By the time he was a teenager his vision was reduced to a tunnel. A diagnosis in his 20s revealed the muscles that supported his eyes were severely damaged. He was tasked with retraining his brain to process visual data in a new way to facilitate living a somewhat normal life. After a year of daily rehabilitation his hard work paid off.

Spalla said of the inspirational achievement, "It was a revolutionary day when I was able to start putting pen to paper and reading for short bursts of time. It was then that I resolved to build on the improvement I'd achieved. And I did that. I used it to write a book of my own that I would self-publish by the time I was 30. It's been a challenging road full of the small setbacks but "A Tribute to Friendship We are One of Many" is the culmination all of those years of overcoming."

To write his motivational, self-help book Spalla committed to just one hour a day of both writing and reading. Though he says one hour sounds so insignificant, over the course of a decade those hours added up to a full year's worth of time. He adds, "That's like changing your entire life by one degree's worth of discipline. So much is possible if you only dare to dream and take those tiny steps forward."

Spalla's "A Tribute to Friendship We are One of Many" encourages small doable steps set in motion daily. He says these series of events will determine a well-won future of achievement and greater happiness. Bringing light to the fact that lives are not "fixed points" but are set on "unpredictable paths that are the sum total of the smallest choices."

About One of Many
One of Many is a company founded by author Justin Spalla. Spalla is the author of "A Tribute to Friendship We are One of Many", "How to be your Orchestrator of your Butterfly Effect" and "When Someone Cares For You".

Information:
To read a portion of the book download the One of Many app for Android at https://play.google.com/store/apps/details?id=com.nehaagar.win8.oneofmany

One of Many - Logo 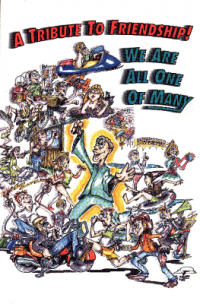