Thunder Bay, ON -- (ReleaseWire) -- 03/07/2016 --Canadian author Lee Chambers directed the movie version of his best-selling book, The Pineville Heist into an adrenaline rushed 80 minute thriller about a high school student that gets away with millions from a botched robbery and is relentlessly pursued by the thieves.

Select Cineplex cinemas in Canada will be premiering the movie starting April 6th with 100% of all funds raised supporting Free The Children. The USA premiere takes place in Hollywood on April 9th.

The book version, released in 2012, gained a huge following selling over 42,000 copies in ebook, paperback and audiobook formats (based on his screenplay crafted up with Todd Gordon).

"The Pineville Heist has instant audience appeal. It is about an everyday young teen facing the everyday challenges of growing up; the difficulties of relating to his father and fitting in with his peers. All the things that most people can relate to with growing up, it could be anyone," explains Chambers.

Director Lee Chambers searched far and wide and ultimately settled on the Australian actor for the lead for his debut movie.

"I'm a British-trained film director, shooting in Canada, but set my movie America, with Australian cast crew. You couldn't get more eclectic if you tried," laughs Chambers. "As a true independent movie that was privately funded I was able to make the movie exactly as I wanted by casting and crewing up people I wanted to work with."

In a bold move, Chambers handed the starring role to newcomer Massara. "Without hesitation I put 110% of my trust and faith in the talented teen to carry the movie," claims Chambers. "And he didn't disappoint!"

Non-theatrical distribution is being handled by Black Wolf Media Group and Origin Releasing with DVD and digital formats available in North America starting May 3, 2016.

Movie information and trailer at http://www.pinevilleheist.com.

About Lee Chambers
Lee Chambers is a British/Canadian writer, director and producer who has received critical acclaim from Total Film Magazine and Fox Television. His Make It Short Film Project gained Executive Producer support from Academy Award winner Paul Haggis and David Cronenberg. His heart-warming 'When Life Gives You Lemons' short executive produced by Roger Corman was selected by over 45 film festivals worldwide and snagged Chambers a Directors Guild of Canada Ontario nomination. 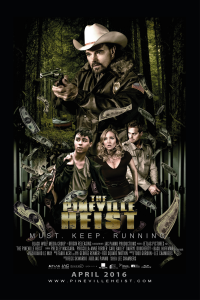