The "Balsamic Vinegar of Modena, the Original" project has been much appreciated at Summer Fancy Food in NYC where it also played the starring role at the “100per100 Italian Gala”

Modena, Italy -- (ReleaseWire) -- 07/13/2018 --After the debut of last year, here is a great success for the second edition of the "Balsamic Vinegar of Modena, the Original" project at Fancy Food Show in New York. The Show is the largest for specialty food in North America, featuring exhibitors from 54 countries as well as the United States and continues to attract top buyers eager to make new connections with food artisans and entrepreneurs.

"At our booth - added Mariangela Grosoli, President of the Consortium - we received the chefs of AICNY (Italian Association of Chef New York), who were able to taste the product and learn about its characteristics and versatility in the kitchen. We also had the possibility to meet bloggers and journalists of important newspapers, interested in knowing our protection actions and understanding how these are carried out in different countries, aware that at the moment in the United States there is no instrument of action against counterfeit, imitative and evocative products. The main interest of the media professionals is writing about the authentic product ".

The Consortium for the Protection of Balsamic Vinegar of Modena was also the key player of the evening "100X100 Italian Gala" - an exclusive event organized at the Scavolini Soho Gallery by "I love Italian Food" and in collaboration with the Italian Association of Chef New York. Balsamic Vinegar of Modena was an element of excellence not only in the dinner menu but also at the time of the award ceremony for the "100X100 Italian Awards". The President of the Protection Consortium Mariangela Grosoli personally delivered the recognition as best Italian ice cream in New York to "L'Arte del Gelato".

The Consorzio will spend still two years promoting the added value of Balsamic Vinegar of Modena and the PGI logo (Protected Geographic Indication) in the USA. The main states on which the campaign will focus are California, Florida and New York City. The next appointment in USA will be indeed in NYC, for the Wine & Food Festival in October, while in September the Consorzio will host in Modena a group of representatives of the Culinary Institute of America (CIA) which will realize a short movie about the product and his territory.

The campaign promotes the added value of the product, in terms of authenticity, safety, traceability, and labelling guaranteed by the European trademark protection and want to enhance the competitiveness of Balsamic Vinegar in the United States- It has been financed by the European Union and also features a web portal http://www.originalbalsamicvinegar.eu and dedicated pages on the main social networks. 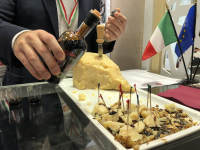