Barbera's Back to Back at the Crystal Tea Room

Philadelphia, PA -- (ReleaseWire) -- 07/02/2019 --Gary Barbera's on the Boulevard wins another Accolade for their Charitable Community Outreach through the Gary Barbera's BarberaCares Program from the Lenfest Institute.

The 2nd Annual Corporate Philanthropy Conference & Awards was held at The Crystal Tea Room in Philadelphia, and about 250 corporate and non-profit leaders joined to celebrate the chosen recipients for a day of education and inspiration. Honorees included people and companies who have demonstrated an outstanding commitment to philanthropy and community service in the Greater Philadelphia region. Honorees were also profiled in expanded awards coverage within the Business Section of the Sunday Inquirer.

The celebratory event included A Keynote Address by John Middleton of the Philadelphia Phillies.

An awards program honoring the 2019 winners

The funds raised from the presenting and co-sponsoring of this event supported The Lenfest Institute for Journalism. The Institute is a progressive and unique non-profit organization whose sole mission is to build sustainable business models for local journalism. The institute's goal is to transform the news industry into the digital age to ensure that high-quality local journalism remains a cornerstone of our democracy. For every dollar donated, The Lenfest Institute for Journalism will provide a dollar for dollar match to further support The Philadelphia Inquirer.

About Gary Barbera's on the Boulevard and His BarberaCares Programs– Proud Recipient of Prestigious Family Business Awards and Corporate Philanthropy as the Region's Most Charitable Givers
Gary Barbera's on the Boulevard proudly celebrates their 30th anniversary since swinging open the doors showcasing Dodge, Ram, Chrysler, Jeep and CPOV vehicles collaborating with it's own Philadelphia's Credit Connection- On-Site Instant Auto Credit. Over 1000 Vehicles including 300 Jeeps Cheap at one location. Barbera's on the Boulevard is recognized by FCA as Philadelphia's #1 volume dealer in both new and pre-owned vehicles for decades. Getting their start as a Dodge dealer has propelled them to be the #1 Dodge Dealer in 6 states, PA, NJ, DE MD, VA, and WV since the start while receiving Chrysler's highest accolade J D Power certification.

The Barbera family credits their parents with instilling the Barbera Culture of Hospitality, Family Values and Work Ethic. Their mother Rita Barbera known to all as "Lovely Rita" was kind, socially conscience, and valued family and hardwork. Their father, Eugene Barbera planted the automotive seed through his business, Palm Auto, a carwash, gas station, auto repair and body shop center located in Fishtown before it bloomed into the sprawling area it is today. The Barbera

family would work for their father as children inspired by their father's work ethic and client satisfaction standards. Their dad said, "Hard work never hurt anyone but Aggravation sure will kill you."

Honored to be recognized with the prestigious Family Owned Business award for dual accolades; Gary Barbera's on the Boulevard for positively impacting their communities economically and BarberaCares for Community Service Excellence. On the heels of this crowning achievement Gary Barbera's on the Boulevard is recognized along side industry icons 6ABC, QVC, and Comcast NBCUniversal for Corporate Philanthropy as the region's most charitable givers. 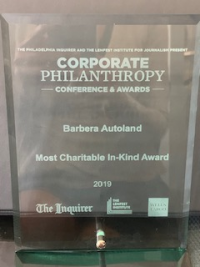