Austin, TX -- (ReleaseWire) -- 10/24/2017 --Jeremy Conklin aka DJ Pressure had been a well-regarded professional DJ already for ten years before he decided to expand his company, JPC Entertainment, to include full-service production rentals. "I first created the company as a vehicle for filing taxes for my DJ services," he says, "but after years of working as a DJ and nightlife consultant at a number of venues, I learned how to wire and tune sound systems and program light shows." Upon discovering the superior performance of BASSBOSS speakers, Conklin burst onto the event production scene with a BASSBOSS sound system that immediately outclassed the competition and helped establish his company as the first call for premium sound.

Conklin first heard BASSBOSS speakers while DJing in Panama City. "I heard them down there back in 2012 when I was DJing at the Beach Bash with Steve Aoki, and again this past March," he says. "This year we were hearing the bass from about three football fields away and decided to go check it out. It turned out it was just four BASSBOSS double 18s. I had never heard so much sound from so few subs. It was the most insane bass I had ever heard in my life. Really clean, with notes I had never heard before."

Realizing that nobody back home in Tallahassee had a comparable system, Conklin returned home and began a conversation with BASSBOSS about building his own system, while simultaneously laying out plans to start his own production company. "The BASSBOSS team was really great about helping me decide on a system and walking me through all the technical details of the products," he says. "I came for the products was even more sold on the service."

Conklin decided on a system that included eight SSP218 subwoofers and six AT312 loudspeakers. Upon receiving the system, he took it out to a club that he manages to test out some music. "We set up four of the 218s and 2 of the 312s and ran through every genre of music we could think of," he says. "Honestly, it was an emotional experience hearing music sound that clear and magical. I didn't have to touch the EQ at all, it had crystal clear and flat frequency response. It just couldn't have been more perfect."

When he started taking his system out for events in July, the response was immediate. "When I did the July events everyone's mind was blown," Conklin says. "Everyone was ranting and raving about the quality." JPC Entertainment is the top choice in the area to handle everything from corporate events to concerts to tailgate parties and Greek life events at nearby universities. All BASSBOSS speakers are self-powered, making setup a snap at any location. "I'm able to get up and going in 30 to 45 minutes from the time I locate an outlet," he says. "BASSBOSS has just made it so easy to use their speakers. You don't need an amp rack or extra cables. You just plug them in and go."

His BASSBOSS system delivers power and clarity that can be easily scaled up or down to fit the needs of each job. With so much power on tap, Conklin has yet to find an opportunity to push his system to its upper limits. "I'll bring out just two boxes for a concert and I'll have to turn it down because people are hearing it a mile away. Nobody realized that you could get this kind of sound outside of a large-scale festival, and we're able to offer this at a competitive price."

Not only has Conklin's system helped him accrue numerous clients without substantial advertising costs, it has also completely re-defined the standard of event sound in the Tallahassee area. "We've raised the bar in the city for sure," he says. "The Greek life community has really helped spread the word. They're all trying to one-up each other so when they hear about one party we did that sounded amazing they want the same system and MORE. I've been adding a speaker or two at each new event."

Sound You Can Lean On

BASSBOSS has given Conklin something even more valuable than amazing sound. "This sound system gives me so much job security it's nuts," he says. "Everyone now associates the best sound with us and BASSBOSS speakers." And the durability at longer events is an encouraging sign that JPC Entertainment and his BASSBOSS speakers will be powering events of all sizes for years to come. "I've run these things for 8-10 hour events and the amp is barely warm," he says. "They can really take a beating, direct sunlight all day, you name it. They're just made very well."

Besides the speakers themselves, another thing that never gets old for Conklin is the look on clients' faces when he fires up the BASSBOSS system during soundcheck. "The look on their face as I start cranking the system—it's priceless. You can tell they were expecting something good but they had no idea."

About BASSBOSS
BASSBOSS creates premium, ultra high-fidelity sound systems for the professional consumer, live sound and systems integration markets. The company was founded on the design and engineering expertise of David Lee, a pioneer in subwoofer design whose work has transformed the audio systems for hundreds of venues across North America. BASSBOSS systems are easily integrated, compact and power-efficient. Each cabinet is highly optimized with dedicated, comprehensive amplification and processing. 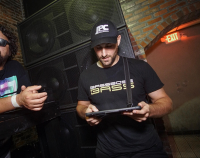