Best-Selling Novelist, Ron Barak to Donate 50% of Proceeds for "The Amendment Killer" to Diabetes Research and Education

Los Angeles, CA -- (ReleaseWire) -- 09/26/2017 --Best-selling novelist, Ron Barak will donate fifty-percent of the proceeds for his new novel to Diabetes research and education. Known for his suspenseful novels, "The Amendment Killer," from the Brooks/Lotello Series, will benefit prominent national diabetes organizations who are applauding Barak's generosity. Barbara Davis, the founder of the Children's Diabetes Foundation, said of his efforts, "The donations are so greatly appreciated, including Ron's wonderful portrayal of young Cassie Webber in his thriller 'The Amendment Killer.' What a great example Cassie offers to all of our children."

The Amendment Killer is a legal and political thriller inspired by Barak's legal career. "We have your granddaughter. Here's what you need to do." That's the text message Supreme Court Justice Arnold Hirschfeld receives as hearings commence in the U.S. Supreme Court to determine the fate of the 28th Amendment – enacted to criminalize abuse of power on the part of our political representatives. Hirschfeld's precocious and feisty 11-year-old diabetic granddaughter Cassie brutally kidnapped to control her grandfather's swing vote upholding or invalidating the amendment, watches her insulin pump running dry and wonders which poses her greatest threat, the kidnappers or the clock. All the while Hirschfield wonders whether the fate of the country is worth his granddaughter's life.

Children's Diabetes Foundation will be featuring The Amendment Killer and Barak's commitment at its October 7 annual black-tie dinner in Denver, Colorado. For additional information, contact CDF's Mattie Peck at 303-628-5106 or mattie@childrensdiabetesfoundation.org.

Juvenile Diabetes Research Foundation will be doing likewise at its October 29 annual Walk for Diabetes at the Pasadena, California Rose Bowl, expected to draw 8-10,000 participants. For additional information, contact JDRF's Sue Pietrzak at 213-233-9905 or at spietrzak@jdrf.org.

To see more of what these organizations say about Barak, go to http://www.ronaldsbarak.com/diabetes.

About Ron Barak
Ron Barak is an Olympic athlete, law school honors graduate, an experienced courtroom lawyer, and himself a diabetic, Barak is uniquely qualified to write this suspenseful novel which will appeal to all political and legal thriller aficionados. Ron and his wife, Barbie, and the four-legged members of their family reside in Pacific Palisades, California. For more about Ron and his writing, go to http://www.ronaldsbarak.com.

The Amendment Killer is now available for pre-order and will be available for purchase November 1. More information at http://www.ronaldsbarak.com and http://bit.ly/TAKPreorder. 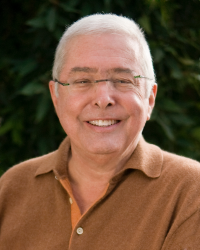 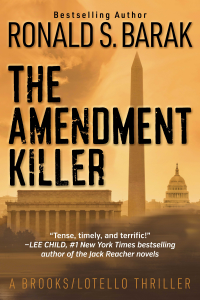