The esteemed life coach and author, Stephen Parato, is excited to announce his latest book: Sozwik. The story will be like no other, following the science and spirit behind an alien bigfoot.

Portland, OR -- (ReleaseWire) -- 09/28/2016 --While only twenty-nine percent of surveyed Americans report a belief in the possibility of bigfoot *, the physical constraints of reality have never held authors back. And readers do not have to be bigfoot believers themselves to enjoy and appreciate the story and ideas put forth by Stephen Parato's latest book titled Sozwik. The story will follow the journey of an estranged, bigfoot-like creature named Sozwik along his stay on earth. Readers will be treated with deep thematic material delving into morality, existence and environmental concerns. By the end of this eye-opening epic readers will be left in awe and be given the creativity and inspiration to make a change in the world.

But reader involvement does not stop there. In order for the novel to reach its full potential author Stephen Parato has launched an independant, two-thousand dollar crowdfunding campaign. These funds will go into professional editing, graphic design, and marketing services, ensuring the story is immaculate and well-presented. Aside from the reward of an amazing and detailed novel, readers will be given the opportunity to alter the story themselves. With backer rewards that allow patrons to name everything from the dedication page to the main female protagonist, Sozwik will be crowdfunded by the people and crowd designed for the people. In addition backers can receive a copy complete with priceless revision notes and marginalia for just ten dollars.

But the most important involvement is the involvement Parato is able to generate among readers while enthralled by Sozwik. The engaging storyline is centered around Sozwik, a member of the Jyoti race. The Jyoti are giant, hairy humanoids with extreme intelligence and are typically confined to their own planet, but Sozwik has been granted the freedom to travel to earth. The story delves into Sozwik's backstory, uniqueness, and future, allowing readers to fully enjoy an absorbing and acute plot. With Parato's completion of his second draft he hopes readers help make the book the best it can be, whether that be through naming a character via the Kickstarter campaign, or through simple telling a friend of its launch this December.

About Stephen Parato
Stephen Parato is an established author and life mentor. As the founder of Feeling Good Feeling Great, Stephen set out to improve the lives of as many people as possible. He hopes that through Sozwik he will be able to touch the lives of many and teach valuable, peace-promoting lessons.

For more information or to back the crowdfunding campaign visit Stephen's Kickstarter page. 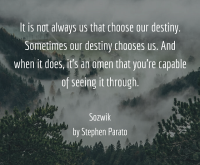