Lake Stevens, WA -- (ReleaseWire) -- 09/26/2017 --A meth lab cleanup can be dangerous in many different ways, so it takes a particular brand of expertise to respond to these situations. Bio Clean is a company in the state of Washington that provides meth lab cleanups in the Tacoma-Renton-Bellingham area, and they also serve residents of Olympia and further down the I-5 corridor. This service that they offer is often needed, because crystal methamphetamine use is quite widespread in the Pacific Northwest and many other parts of the United States.

In 2012 an in-depth survey was conducted that is called the National Survey on Drug Use and Health. They found that well over a million people used methamphetamine within the last 12 months, with 440,000 of them admitting usage within the last month. Without question, there is quite a demand for this dangerous drug, but law enforcement agencies do a great job of finding and shutting down meth labs.

Bio Clean was founded in 1998, and a couple of years later, they recognized the fact that meth lab cleanups were becoming more and more necessary. They decided to fill the void for the benefit of the communities that they serve in 2000 when they became a state certified meth lab remediation contractor. This was when the state certification process was just being developed, so the company has an unparalleled level of experience when it comes to meth lab cleanups in Washington state.

The chemicals that are used to create methamphetamine are very hazardous, so they must be handled with care by highly trained, certified professionals. These materials are volatile, so they can ignite and cause fires and/or explosions. Plus, significant quantities of hazardous chemical waste are generated through the activities in a methamphetamine lab. These byproducts can include chloroform, phosphoric acid, and hydrochloric acid.

In addition to the dangerous chemicals that can often be present, the methamphetamine itself and the residue that may be present are also hazardous substances that can do a great deal of damage. There is also the possibility that hypodermic needles can be found in a meth lab, and Bio Clean is fully certified when it comes to handling sharps and blood.

About Bio Clean
Bio Clean is a Washington-based biohazard cleanup company that was founded by Theresa Borst in 1998. They handle many different types of cleaning assignments, including meth lab cleanups. 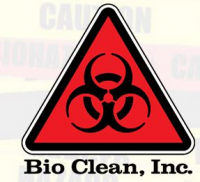