Blue Gas Marine, Inc. is the first in the nation to offer bi-fuel technology for boats to run on traditional fuel and also on natural gas, separately or together as a hybrid system. The add-on system solves the core/essential problem for boaters—high cost of fuel and maintenance and greatly reduces pollution, making it the cleanest option to run on traditional boat engines.

Some of the benefits of the add-on system include:

Blue Gas Marine, Inc. President & CEO, Miguel Guerreiro said, "It is great validation to win such a prestigious industry award at IBEX." Guerreiro went on to say, "My team has worked hard to develop and perfect the technology that is being adopted and already revolutionizing the boating world. To get the recognition from the industry experts that our product can single-handily make boating affordable again, and also much cleaner and with greater ease since you use the same combustion engines already available on the market today is an honor. Boaters no longer smell exhaust odor making it so much safer and more enjoyable to spend a day on the water. We are seeing marinas offering natural gas fuel on the water, people getting the systems to fill-up their boats at home and service centers doing local installations and maintenance. We are proud to be the leader bringing the on-board Natural Gas Hybrid fuel system and the fuel dispensing solutions to the industry nationwide and to some international locations."

Blue Gas Marine, Inc. focused the deployment of the system to those who are frequent boat operators such as commercial fishermen, law enforcement, charter boats, ferries, tugs, large ships, the military and recreational users. Since the technology is designed to be installed on most models of existing or new outboard, inboard and generator engines, the Blue Gas Marine system is applicable to the entire powerboat market, some sailing applications and house boats. The technology uses natural gas in the compressed (CNG) or liquefied (LNG) forms so the benefits for boaters is endless. The company has representatives in North Carolina, Florida, California and available along the eastern and western coast lines.

"One surprising area for application has been the houseboat market. We were able to expand our system to completely replace traditional fuel on houseboats. This clean and very affordable fuel can now run the propulsion engines, the power generators and even the cooking and heating units. Simply by installing our add-on system onto the existing engines and devices we make all the Gasoline systems and the Propane systems run all on Natural Gas. A single fuel for everything with phenomenal operating savings that usually pay for themselves in less than a year." Guerreiro said. "The other great application that has emerged is pontoons and wake surfing boats, which are great party and sport boats but even better now without any of the exhaust odor or smoke, which makes it the more enjoyable than ever to take the family on the water."

This award is not the first time that Blue Gas Marine, Inc. has garnered accolades – it won the North Carolina Technology Association (NCTA) 2014 Top 10 Startups to Watch Award and the 2015 Top Product Award from Boating Industry.

About Blue Gas Marine
Blue Gas Marine is poised for a very dynamic future with strong interest nationally and abroad as well as a growing network of dealers and fueling stations. 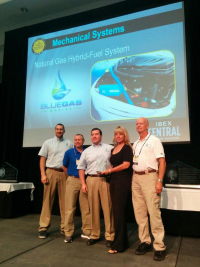 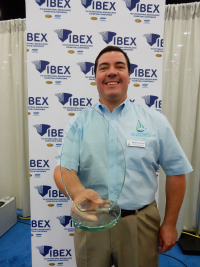