Agoura Hills, CA -- (ReleaseWire) -- 04/22/2015 --Global Genesis Group is excited to announce that they have acquired the worldwide distribution rights to the 13 half documentary/reality series Blue Goose produced by Buoy 22 Films. For the first time ever, Detroit-based production company Buoy 22 Films has been allowed to go behind the scenes of the Michigan State Police recruit school. The result of this never-before-seen access is a half hour documentary/reality series, which follows thirty-eight men and women as they attempt to survive the Michigan State Police Academy, one of the toughest police academies in the world.

Richard Romano President of Global Genesis Group stated, "If you liked Cops, you will love Blue Goose. The series gives the audience an unprecedented view of the tradition of the Michigan State Police Academy and their intense training, which has gotten even tougher as the world they serve has grown more dangerous. GGG is excited to make the hard-hitting Blue Goose available to audiences around the world especially with the fragile state America is in with its declining attitude towards law enforcement,

Patrick Moug, Blue Goose's director/producer stated "everyone at Buoy 22 Productions is very excited to be signed on with Global Genesis Group. Their team's enthusiasm, experience and vision for Blue Goose is right in step with our goals for the program. GGG's ability to showcase this series in North America as well as marketing it internationally is one of the reasons why we know this is such a great fit. We feel there is a universal need to foster a better understanding between residents and the policemen who have the charge of their safety, and Blue Goose will be a way for people to understand that there is humanity behind the badge." 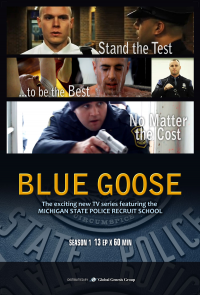