Boston, MA -- (ReleaseWire) -- 11/17/2014 --Held at the United Nations in New York City on Wednesday, November 19, 2014, the inaugural Women’s Entrepreneurship Day (WED) marks the launch of a global movement to celebrate, empower, and support women entrepreneurs worldwide. A group of 16 Boston-area residents will be accompanying Kwamboka Okari, Executive Director of the Okari School in Kenya, which is supported by the Margaret Okari Children’s Foundation, to this historic event. Okari will be named an advisor from Kenya to the WED team, and is being considered as the chairperson from Kenya in 2015. At the United Nations, Kwamboka Okari will be reunited with President Obama’s grandmother, Mama Sarah Obama, who recently established the Mama Sarah Obama Foundation. Mama Sarah Obama and Kwamboka Okari have remarkably similar stories and visions for the future of the orphaned children they help every day. Okari has a powerful vision for the children of the Okari School. Her sentiments are simply spoken: “We believe that educating our orphans has the power to shape not only their destinies, but that the collective power of educated individuals can influence the destiny of Africa herself.”

The Margaret Okari Children’s Foundation is dedicated to helping orphaned children in Kenya, most of whom lost their parents when the AIDS pandemic hit this rural community, and is committed to building the physical, emotional, and educational foundation of the children of the Kisii region to ensure that these children receive the educational equity that every child should have.

The Margaret Okari Children’s Foundation educates, feeds, clothes, shelters, and advocates for the children. Many organizations have been doing this in response to the needs of orphaned children in Africa, but this organization takes it one important step further by providing the children with a home and a future through three fundamental initiatives: education; health and human services; and leadership and sustainability. The foundation’s vision is to provide future-ready lives for the children, while respecting and preserving their cultural integrity, giving them the care and guidance that will enable each child to navigate the world confidently and lead an inspired life.

Cam Mirisola-Bynum is Inbound Marketing Manager at Grant Marketing in Boston, has an extensive background in publishing and communications, and is the Communications Chair on the U.S. Board of the Margaret Okari Children’s Foundation. She is one of the women travelling to NYC with this group. “I am beyond thrilled to be in the company of such amazing women. We recently held our annual fundraiser in Andover, MA, and are carrying that momentum with us to the UN. Kwamboka and Peg Campbell, our U.S. Board Executive Director, are two of the most inspiring people anyone could have the pleasure of knowing and working with, especially on such a worthy cause.”

While Campbell is the first to point out that “lots of littles make a lot,” during her tenure, the Margaret Okari Children’s Foundation has provided improvements to the children’s lives with the addition of new dorms for the children, tree planting on the property, a water catchment basin, and the upcoming construction (slated for 2015) of a new, clean-water well, funded by the Rotary Club of Andover, MA, among many other initiatives. Water Defense, the clean-water advocacy non-profit founded by Mark Ruffalo, has agreed to test the well water for cleanliness. Scott Smith, the chief scientist at Water Defense, was at the recent fundraiser and presented a check to Okari towards the construction of the well.

The children of the Okari School recently wrote poems celebrating the completion of the upcoming well. The foundation created a chapbook, Little by Little We Fill the Cup, a cross-cultural collection of poetry from the Okari children and children from the U.S. and UK. Clinton, age 13, writes in an excerpt from his poem, “When I see you at our school I know/I will get enough time to study./Water, water, when I see you I know/I have finally arrived home.” These sentiments are testament to the foundation’s successful advocacy in providing a sustainable home for the orphaned children of Okari.

For more information on the Margaret Okari Children’s foundation, visit margaretokari.org. Go online at womenseday.org for details about Women’s Entrepreneurship Day. Visit msof.org to learn more about the Mama Sara Obama Foundation. For additional information on the other organizations that support the Margaret Okari Children’s Foundation: grantmarketing.com; portal.clubrunner.ca/3379; waterdefense.org; and littlebylittlebook.org.

In the picture: Kwamboka Okari, Executive Director of the Okari School; Peg Campbell, Executive Director of the Margaret Okari Children’s Foundation, U.S. Board; and Scott Stevens, Chief Scientist at Water Defense (left to right), at the foundation’s recent annual fundraiser celebrated the installation of a new, clean-water well at the Okari School in Kenya, slated to begin construction in 2015. Stevens presented a check to Okari to go towards the completion of the well, and has pledged to test the water to ensure its safety.

Get Social With Us: 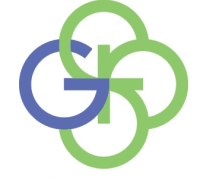 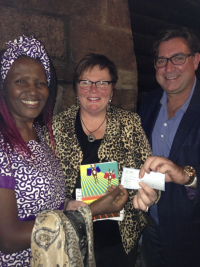